You’re looking for a place in the country.

You come across a derelict old building – infested by wild animals and, sometimes late at night, wild teenagers.

You have a choice: get the heck out of there, or look at the place – a massive former canning factory – and visualize what it could become.  Cliff Smith chose the latter.

8 years later, the building, surrounded by nearly 4 acres of land in the village of Grafton, Ontario, is a wonder to behold. 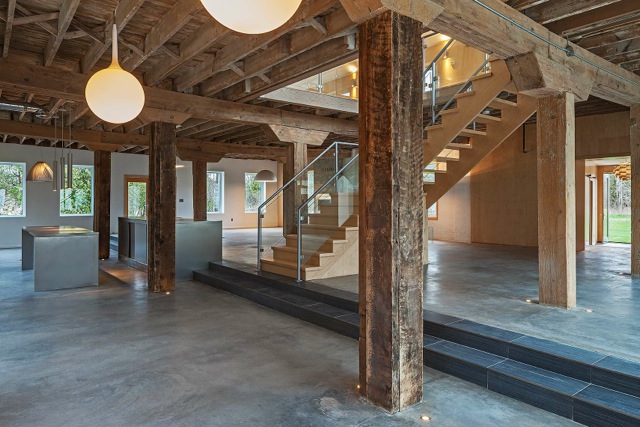 It’s home on the weekends for Cliff and his wife, Yasmin.  During the week, it’s a showroom for the Vincent Sheppard line of modern furniture Cliff distributes across Canada through his company Augustus Jones Inc.

My husband and I were  invited to visit with Cliff and Yasmin after a reading from my book A Good Home  in nearby Cobourg. We were grateful to rest and dine with them before heading back home.

“Go try out the various sofas and chairs till you find one you’re comfortable in,” Yasmin, an osteopath, encouraged me soon after we arrived. “Rest up a little.”

The problem was that they were all comfortable. But then I found the perfect seat: a beautiful red chair. Oh, wow! I sank into it, feet up on the matching ottoman, and didn’t want to move.

A world away from those days, as we sat with our spouses and another schoolmate, Paul, in Cliff’s astonishingly beautiful space,  we reminisced. “Gerry”, our principal, knew the name of not just every student, but our parents as well. Gerry believed that every child had great potential, and a duty to live up to it. If we didn’t,  there was a good chance he’d pay our parents a visit.

Cliff became a top-notch art director and book designer in Canada’s publishing industry. But as the industry faltered, he decided to do something different. 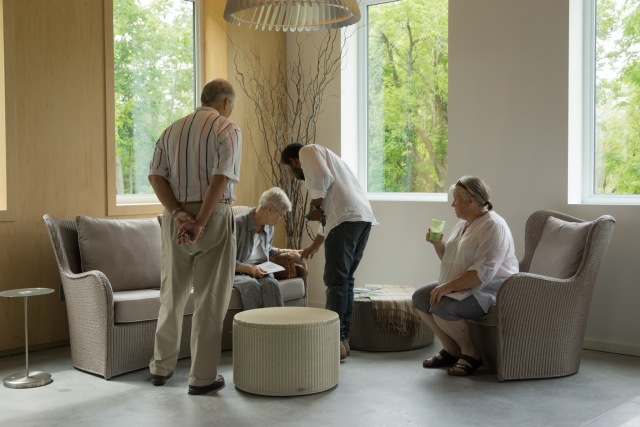 The old canning factory in Grafton excited him. He saw what it could be: a weekend home for his family, a large space for cultural events such as book launches, art shows and other things, and a huge, airy showroom for modern indoor and outdoor furniture.

Cliff is a visionary willing to work hard to realize his big dreams. As his former schoolmate, I am intrigued, guessing at what he’ll do next, and enormously proud of his achievements.

This photo and the next by Peter Sellar

What a remarkable space. What  an exciting selection of modern furniture. And what a distinctive home.

Bravo, Cliff Smith. Gerry would have been proud.