Once a month, at the same time, in the same restaurant in a suburban mall, I meet Arna and Phyllis for lunch.

I’d never have met these women were it not for the many sessions we attended together at Toronto Rehabilitation hospital, trying to come to terms with chronic pain, trying to figure out alternatives to narcotic painkillers.

The group is one of my two separate trios of “Toronto Rehab grads” . We meet regularly to support each other.

You might expect us to be miserable, and sometimes we are.   But among each other, there’s no need to pretend. No need to say “I’m fine, thanks,” when you’re not.  We’d see right through it.

“Seriously – how are you really feeling today?” Someone will ask,  looking you straight in the eye.

And out comes the truth:  “It’s been a really crappy week. The pain’s been very bad.”

But as Arna reminds us: “I might be in pain but I don’t have to BE a pain.”

And so we laugh. Perhaps the most surprising thing is how much laughing we do. In my second trio, Penny has the talent of cracking up Joan and me with one short sentence. The woman is a born comic.

“Why don’t you write comedy?” I ask her.

“Because it’s just stuff I say,” she replies. “I don’t even know it’s funny till someone laughs.”

We laugh at the silliest things. Maybe that’s because we give each other license to SAY the silliest things to each other. Like the day when Arna and I both noticed that Phyllis seemed unusually stressed. Turns out, she’d been struggling with pain and allergies, but Phyllis was still pushing herself hard to get certain tasks completed. 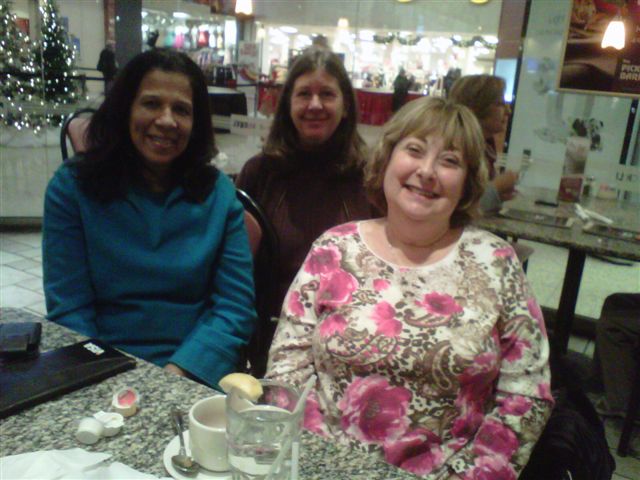 “You need to rest,” Arna advised.

“You’re too tired to rest?” I asked in disbelief.

As if on cue, the three of us burst out laughing.

Chronic pain never rests. The very term “chronic” means that it’s with you all the time; only the severity fluctuates. Sunny, cool, dry days are helpful to some people. Wet, cold, humid days are agony to many. And freezing temperatures? Extreme cold does a number on both our bodies and our minds.

We learned several drug-free techniques at Toronto Rehab.   Laughter is just one of them.

The act of staying in touch, and keeping these lunch appointments, are two of the tools we use to fight back against the depression that’s a travelling companion of chronic pain. And when we laugh at the ridiculous things we say on a day when even the act of walking is painful – we’re not just using one of the tools we learned – we’re also kicking chronic pain in the teeth.

Chronic pain kicks us in the butt all the time.  Kicking it in the teeth once a month is the least we can do in return.

This post is dedicated to Joan, Penny, Arna and Phyllis — and to everyone who struggles with a chronic illness.

7 thoughts on “Laughing Through The Pain”