Sally Cronin  makes me want to stand up and salute.

An icon among independent authors and bloggers, Sally is host to more than 32-thousand blog followers, supporter of hundreds of authors around the world, author of eleven books,  gardener and wife.

She and her husband David live in Ireland.

But let’s start at their beginning.

“I was assistant manager of a hotel and took David’s booking for 10 days starting on September 16th.  I commented to one of the receptionists that I loved his accent and that I thought I would marry him… joking!

“He arrived and I organised some business meetings for him. He was due to leave on the 26th but booked in for another two nights. He invited me for a drink after work and we chatted for about an hour.

“He asked if I would have lunch with him the next day.  We had lunch and walked along a windswept beach in the rain. That evening, he met me after work with a Chinese takeaway and the next day he came to say goodbye. He confessed that he had booked the two extra nights so he could ask me out, because he had fallen for me right away.

Since that remarkable beginning, Sally and David have lived in 17 houses — some rented, some bought and restored — in countries as varied as Sri Lanka, South Africa and Spain.

“Each one has had a different location or character but all were home because we were living there. For me, home is where the heart is and that means David and me.”

They recently returned to Ireland after several years in Spain. The two share a large home office. 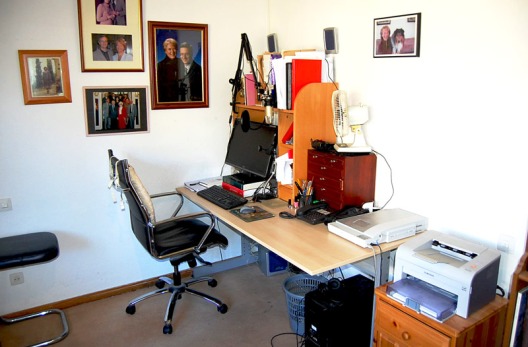 “I also love the kitchen-diner where I create meals and we entertain our family and friends. However, I have to say that I love our little library. Every time I walk through, I can see my collection of books from Wilbur Smith and other favourite authors.”

Sally’s own books range from novels to non-fiction, sometimes inspired by her own life.

“My first book, Size Matters, was a health and weight loss book based on my own experiences of losing 70 kilo. I have written another ten books since then. I am an Indie author and proud to be one.”

Sally took a break from writing books when her mother became ill and died in 2012. A qualified nutritional therapist, she started her blog (Smorgasbord – Variety is the Spice of Life) “as a place to write about health, humour and any other subject that interested me.”

Her blog also provides a platform for other authors — a place where they’re introduced and their books promoted.

“After twenty years as an Indie author, I understand how difficult it can be to keep your latest book in the spotlight… Nothing gives me more pleasure than seeing an author that I have promoted receiving a comment stating that ‘I have bought your book’. Job done.”

At home, Sally and David always seem to have something on the go. They’ve been working on the garden. And Sally’s new book, inspired by the couple’s return to Ireland, launches this spring. It’s the sequel to Tales from the Garden.

“Tales from the Irish Garden continues the story of Queen Filigree and her court as they seek exile in Ireland in the garden of the Storyteller. The stories are linked and fall into the four seasons, peopled by new characters, resulting in some tears and I hope quite a bit of laughter.”

Her own life has included personal disasters, triumphs and suprises.

“Around every corner there has been the unexpected. I have pushed open some fascinating doors which led to where I am today.

“Although we are now well into our 60s, we still believe there are a few more doors to push open and a few more places to visit. For example, we love our current house, but in a few years it will be time to move on. As long as we are together, wherever we end up will be home.”

128 thoughts on “At Home With Sally Cronin”