Trying to hold on to summer while quietly giving in to early-autumn rituals.

I’m still ‘swimming’ outdoors, but the heat also went on in the house last night.

I dusted off the outdoor furniture as if summer isn’t almost finished, but I also changed the tablecloth in the dining room to something autumnal.

I salute the few late blooms of white hydrangea as if it’s early summer, while around me, most Annabelle hydrangea flowers have already turned green for autumn.

I’m still urging on our beets and zucchini in the garden, but getting ready to roast and preserve some just-picked tomatoes for autumn meals.

“Keep growing!” I tell them. 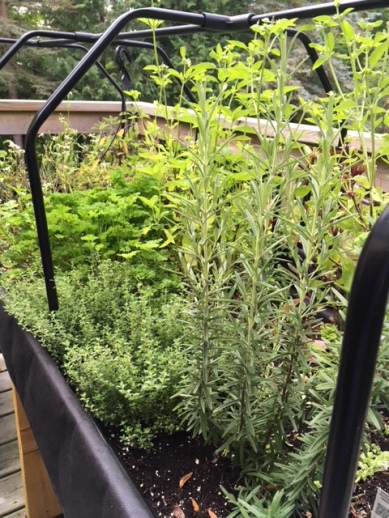 I eye the pots of amaryllis outside, knowing it’s almost time to shake off the soil and bring the bulbs indoors.

I see this patch of maple leaves changing colour, and pretend they’re a charming seasonal anomaly.  Meanwhile, I narrow my eyes at a nearby tree whose leaves have already turned an unattractive dull-brown. 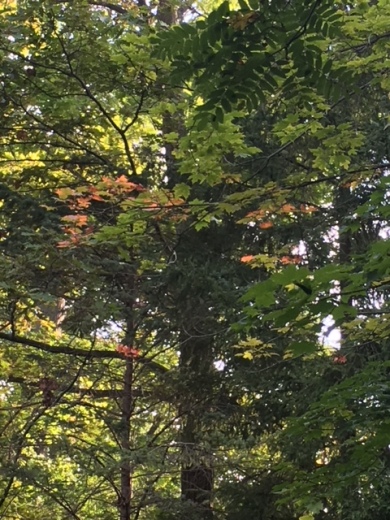 Perhaps most ridiculous of all, I am foolishly encouraging this sunflower seedling to keep going, telling it that blooming is not beyond the realm of possibility.

Yesterday, I listened to an old favourite song, “Turn, Turn, Turn”, (Pete Seeger) whose lyrics were excerpted from the biblical book of Ecclesiastes (“To Everything there is a season”).

But there are limits to these accommodations of the change in seasons. For example, I have resolutely not bought any spring bulbs, though I know my husband will likely go out and get some.  (I figure he has enough garden work to do at this time, with little help from me.)

Yesterday, I glimpsed a Christmas decoration show on television. For a few moments I stared in bewilderment, then turned off the TV.

To everything there is a season. But even as I creep and lurch my way into fall, it’s way too early for Christmas!