It’s been a long time since I was able to take a long walk – something I loved to do. So Beth Callahan, hiking in France and Spain, decided to ‘take me along’ partway.

She didn’t know that San Sebastian, one of the places pictured here, occupies a place in my heart for one funny and several beautiful reasons.

I was among the first Canadians to arrive there at the height of the passionate ‘fish war’ between Canada and Spain in 1995 and found myself defending my country — while also assuring San Sebastian residents that if they would only agree to cook it and send it back, they could have all our Canadian fish. (Great fish recipes and cooks there.) It made many people smile, though one man never got over his upset at me for being Canadian.

Thank you, Beth, for evoking memories of this special place, and for the other photos too!

Notes from a Hermitage

For blogging friend extraordinaire, Cynthia Reyes (.com), who I have walked some time in honor of during this hike, here are some pictures of Good Homes seen along the way in France and Spain: 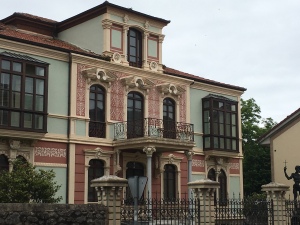 Tonight I’m in Llanes, which a Spanish speaker tells me is pronounced “YAH-nez”. There are houses here called “Casas Indianos”. They are mansions built during a time after many from the Northern coast of Spain had gone abroad to the Americas to find a way of making a living during a time of hardship in Northern Spain. These mansions were built as fruits of their labor overseas.

Just beyond Unquera in the North of Spain. It’s been turned into a hiker hostel.

Spanish Colonial? This is in San Sebastián, Basque Country. San Sebastián was one of, if not the, most beautiful and vibrant cities I’ve ever visited.

24 thoughts on “Some pictures for Cynthia”