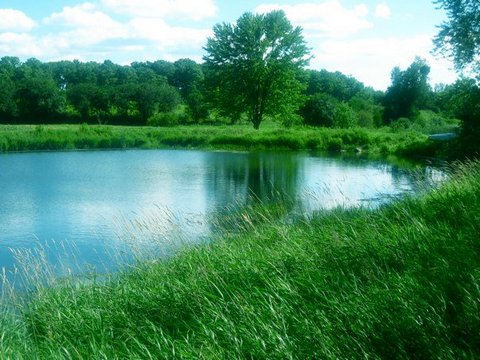 Way out of reach is where the biggest, sweetest fruit always grow. The sweetest guava hangs way out over the middle of a deep pond.  The perfect apples are at the top of the tree.

And far below them you stand, wishing you had wings.

That’s what I’m thinking as I gaze up at a bunch of apples near the top of our big old apple tree. A heritage variety, Wolf River, this tree and the one next to it are well over a hundred years old, taller than our two-storey farmhouse, and still going strong. When ripe, the apples are as big as grapefruit, fragrant, with an unusual spicy-sweet-tart taste. Perfect for pies.

Last year, there were hundreds of ripening apples to choose from: enough for birds, squirrels and humans to peacefully share.

But these trees only bear heavily every other year. Since this is their “off year”, it’s a race against the wildlife to get at the fruit first.

If we’re lucky, the wind blows some off the trees in early October. These windfall apples aren’t ripe, but make delicious filling for crepes. Just cut off the bruised parts, slice up the rest and drop it into a hot pot, along with brown sugar, cinnamon and butter.  But the very best and biggest apples are those that ripen on the tree.  Just two of them could make one pie. 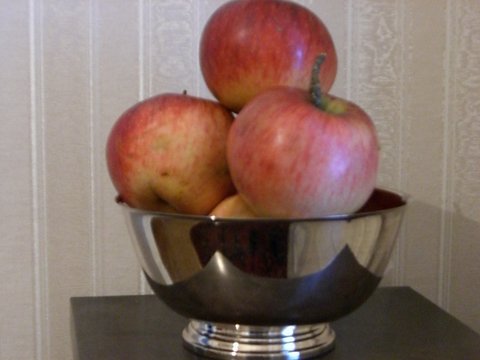 “I’ll use the tall ladder to get them all in a week or so”, my husband says.

Several days later, I go outside and look straight up at the treetop. The apples are still there, but something doesn’t look right, somehow. It’s like there’s a big dark bundle right above a bunch of apples.

“You should go take a look,” I tell my husband when I come back inside the house.

He goes outside. He comes back and says: “That’s the biggest squirrel nest I’ve ever seen.”

It figures. If you’re a squirrel who likes apples, it makes perfect sense to build your home right at the source of your food.

Squirrels have to eat, after all. But …

“You little creeps!” I hear myself yelling up at the nest.

On the Internet, I learn that squirrels are notorious criminals. They steal pears, peaches and apples. They build their nests right in the trees and get to the fruit before the humans can. This makes fruit tree owners so furious, some have become criminals themselves – moving from trapping to illegally shooting the squirrels. It’s war out there.

Meanwhile, our apples have stopped falling. The remaining ones get bigger and riper every day. I can’t understand why the squirrels haven’t got them yet.

Or my husband, for that matter.  There’s no sign of a ladder or stick, or a husband getting ready to pick apples.

But — what if the squirrels have been watching the apples just like we have? Just biding their time? What if they gang up on my poor husband when he’s tottering on a tall ladder, aiming a long stick at the apples right below their nest?

“Let’s just pick the ones you can reach with the stick,” I say one early evening.

Surprisingly, he’s able to pick most of the apples, except for the ones nearest to the squirrel nest. He looks up into the tree, eyeing that bunch wistfully.

We decide to leave them to the squirrels and be thankful for the ones we already have. I’m packing the apples into a basket, when I hear, “What the hell…!”

And an instant after that: “There’s a raccoon up there,” he says, pointing, voice raised. “An enormous raccoon.”

He’s right. It is huge. A grey-black thing, all fur and eyes and tail, looking remarkably comfortable, almost curled around a tree branch. Seems there’s more than squirrels eyeing those apples.

We decide to leave him be.  Meanwhile, you oughta see what the folks on the Internet have to say about raccoons. Yep: it’s war out there…

8 thoughts on “Apples and Critters”