Some weeks ago, I asked the question: Who would buy an old house, knowing it needed a lot of renovation?

John Garside replied: “I would!”

And he’s doing exactly that.  Which led me to more questions:

Why would a big-city guy, born and raised in Toronto, sell his comfortable home and move to a small town 2 hours away in Prince Edward County?

Why would he buy a rambling old house, knowing it would need years of renovation – most of it his own labour?

And why – several months into the dusty, grueling process – is John so darned happy with his decision?

John is the former editor of the horticultural newsletter that publishes some of my garden stories and poems.  When I heard about this move, I was happy for him — but very curious at the same time.

Was he, like so many other émigrés who’ve left big cities and moved to “The County”,  planning to have his own vineyard and make wine?

Or become a landscape painter, perhaps?

None of the above.

Turns out that John has had a love affair with the small towns and lakeside settings of  Prince Edward County since he was a teenager on a Grade 13 geography project in the area. Years later, he fell in love with Ann, who also loved the area. They visited often, and even honeymooned there.

Six years ago, they bought a condo in The County for weekends and summers.  By then, the area was already becoming a trendy place.  More and more people were ditching their big-city lifestyles and operating vineyards and wineries,   restaurants, cooking schools and  art galleries. Some were winning awards for their cheese and wine.

More and more artists had moved there, while others were buying weekend and summer homes in the small, lakeside towns.  Still others discovered that The County was a great place to visit.

Meanwhile, John and Ann toured an old house in downtown Picton one weekend a year ago.

“Walking through the home,” John says,  “I felt an immediate attraction, not only for the home but the property itself.  It needed a keeper, and I really felt that we were the ideal people to take on this project.” 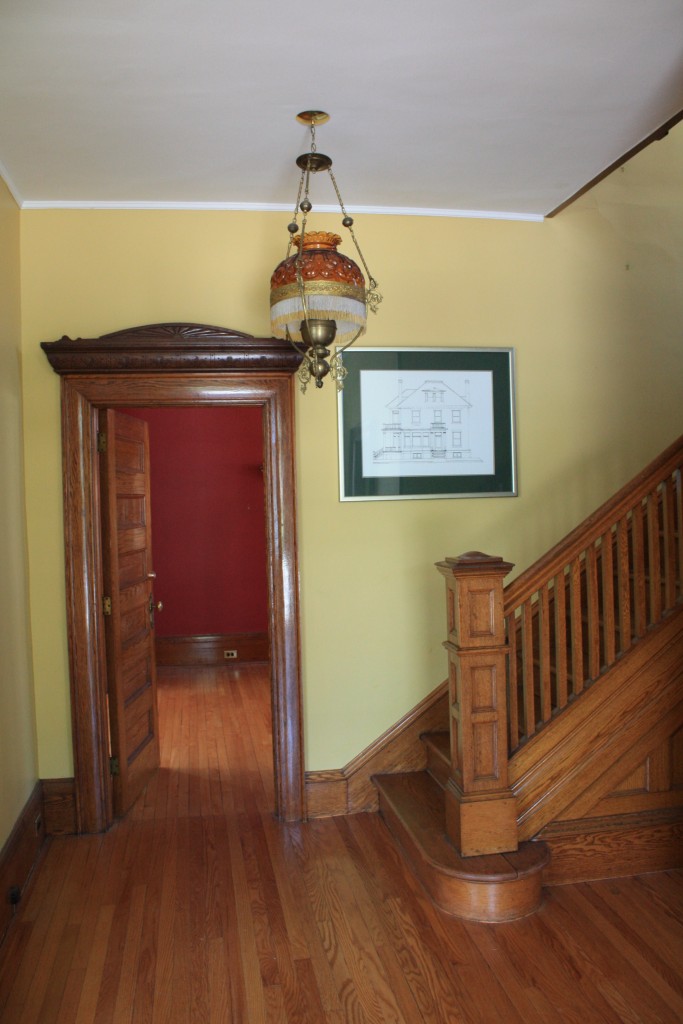 Only four families had owned the house in 100 years.  Each owner had  preserved its grandeur.

Each bedroom has its own bathroom.

“And lastly,” John says, “the stained glass windows in every room are wonderful!”

John sounds like a man in love – with a house.  But his eyes were wide open.  For all its good looks, the house needed a lot of work.  New electrical wiring and plastering,  for starters.   That meant floors and walls ripped open, etc., etc., etc.

John’s been doing the work for several months now.

“This project”,  he says, is “the greatest test of my skills in my life”.

For one thing, he’s doing most of the work alone. For another, he’s not a brawny guy – John weighs only 155 pounds.   And then the third thing: he promised Ann that they’d move in by the end of April.

So how’s it going?   Will John and Ann be able to move into the house as planned?

We’ll find out!  I’ll check in with John each week.  And I’ll share pictures and progress with you.