I know that I am seriously challenged in some things.

Like cooking. Or baking. Or sewing. Or floral arranging. Or…. you get the drift.

Last year, I tried to make Christmas arrangements. The best I can say for them? They made people laugh.

But every saint has a past and every sinner has a future, and since this is the Advent season, I am full of hope for my own redemption.

So I’ve been trying to make Christmas arrangements again. A solitary, mindful activity that suits my Advent mood well.

First off: I had no budget. So all, or almost all, the ingredients had to come from my own garden, or from inside my house somewhere.

The first result is a bit uneven. 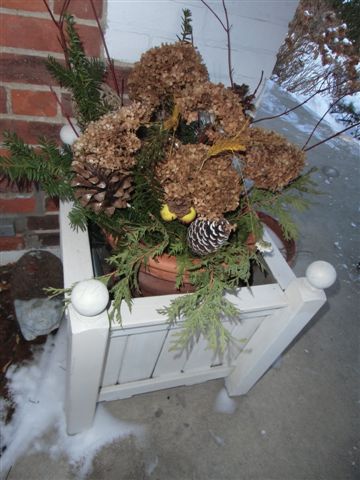 The second one, with much the same ingredients — plus an old fake bird and a single dried rose still on its long stem — showed more promise. Maybe it was just shaped better. 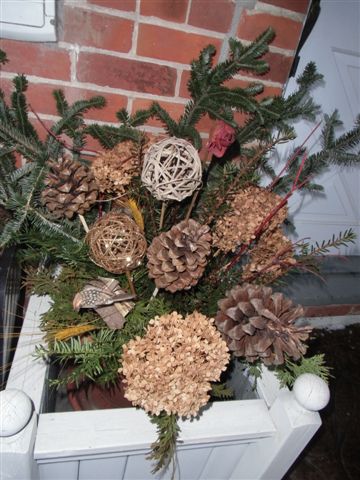 That encouraged me to try a different, larger design. I used mainly spruce branches, dried hydrangea, dried astilbe and a reddish branch of something.

But this one was not quite right – I’m still not sure why. 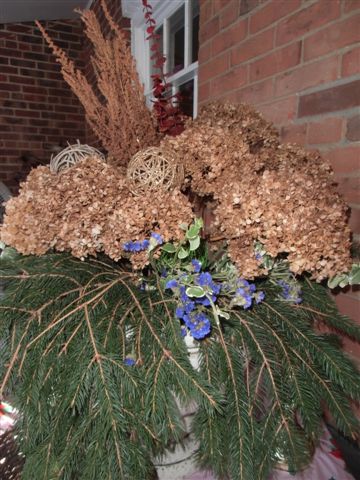 Maybe the blue Everlasting flower from an indoor arrangement doesn’t fit? (Yes, I kept the dried-up flowers from arrangements sent us when my husband was ill.)

Finally, I felt bold enough to confront the long plant stand. You may remember that arrangement from last year – it was an inelegant mess.

Could I do better this year?

Totally intimidated at first, I cheated.

I bought some discounted southern magnolia branches  – 3 bunches at 5 bucks a bunch… a major steal.  At least, I think that’s magnolia – those leaves that are shiny-green-on-one-side, rust-coloured-on-the-other.

And here is the arrangement: 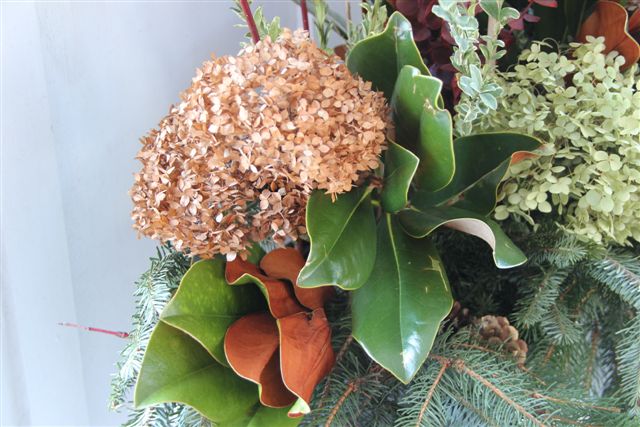 My mother used to say: “Self praise is no recommendation.” So I shall make no editorial comment.

Instead, I shall sit back and await your accolades.

Fishing for compliments is exhausting.

Dedicated to my sister Pat and all domestic divas, including many in my blogging network (you know who you are).