One garden here at the old farmhouse is extra-special.

Partly shaded by a large red maple, it has two dogwood trees, two purple lilacs, a Japanese maple and a forsythia shrub. The Japanese maple was stuck there “temporarily” but was somehow forgotten and has outgrown its spot.

“One of these days, I’ll have to move it,” my husband says. But that tree is so big now that I suspect it’s not going anywhere.

In front of them are smaller plants: Solomon’s seal; ferns; the intriguingly shaped “Jack-in the Pulpit”; the occasional trillium (Ontario’s official flower); may apples and another woodland plant whose name I never learned.

Pink tulips come up every spring, as do daffodils, astilbe, and hosta. It’s the only garden bed that’s home to such a variety of characters: woodland, shade, and sun-loving plants. 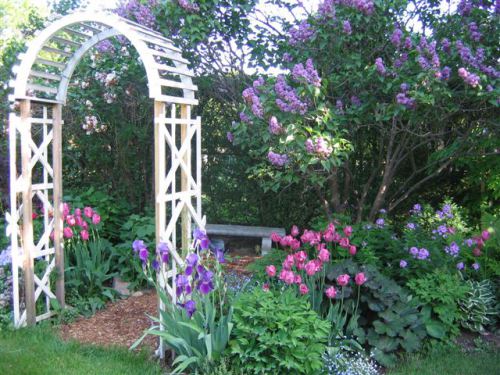 18 thoughts on “Mother’s Day in the Garden”