2017 has been a heck of a year for Susan Statham, and that’s not counting the new arts festival she’s co-chairing in November, or the murder mystery she’s almost completed writing.

The Ontario artist – she paints and writes – has produced portraits of 12 of Canada’s prime ministers, a project that required tremendous work.

After thoroughly researching each subject, Susan painted the portrait in her home studio in Northumberland County, east of Toronto.

If you visited her home repeatedly in 2016 and 2017, you’d notice a different prime minister’s portrait on her easel each time.  It was awe-inspiring.

The portraits were commissioned by Galerie Q in Cavan, Ontario, to celebrate Canada’s 150th year as a nation.

One surprising similarity Susan discovered in ALL of Canada’s prime ministers? They all had blue eyes. (Strange, eh?) 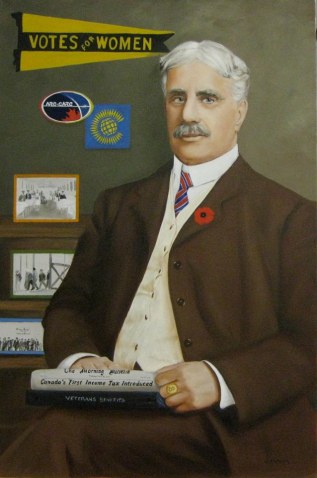 But each portrait is unique.  Susan included cues.  The ‘8’ on Sir Robert Borden’s ring? He was PM for 8 years. Also, a newspaper headline declares the income tax he introduced.

In PM John Diefenbaker’s portrait, Susan says,  “The Inukshuk represents the opening of the North and the pin on his lapel as the first to sell Canadian wheat to China.”

Prime minister for 15 years, Pierre Trudeau introduced the Official Languages Act and the Canadian Charter of Rights and Freedoms. There are cues to them in his portrait below.

In some cases, the cue/clue may point to a well-known controversy or personal foibles.

Take, for example, Susan’s depiction of Canada’s longest serving prime minister, William Lyon McKenzie King, who governed through the tense years of WWII, and led the creation of the TransCanada Airlines, among other deeds.

Search the portrait and you’ll find other cues.  A lifelong bachelor, King was a spiritualist who visited mediums, conversed with his dead mother, political leaders and his dogs, and owned a crystal ball. He loved dogs — 3 consecutive terriers named ‘Pat’.

“We know about this because he entered it in his very comprehensive diary (1893-1950) – a diary he wanted destroyed when he died. These wishes weren’t followed. In fact, you can read his diary online.”

Then there’s Lester Pearson, prime minister from 1963 to 1968.  He received the Nobel peace prize for defusing the Suez Canal crisis; Susan wrote the Nobel motto “Pro pace et fraternitate genitum” (“For the peace and brotherhood of men”) on the bookcase behind him.

“In the bookcase are binders representing some of his accomplishments, despite leading minority governments – universal health care, Canada pension plan, student loans, the 40-hour work week, the auto pact, the point-based immigration system, and the abolition of capital punishment. He was determined to give Canada a new flag and despite intense opposition, he persevered.”

But there’s yet another side to this talented artist: Susan writes short stories and books. Her novel, The Painter’s Craft, is a murder mystery, set in Toronto’s art world.

Susan says: “The inspiration for this book, published by Bayeux Arts, came from one sentence in one art class – ‘Cobalt violet is the most poisonous colour in your paint box’.”

Her second novel in the series, titled True Image, is almost complete. It won the inaugural Medli Award for most promising manuscript by a published author.

You’d think that would keep Susan busy enough, but she’s also president of her local arts association, Spirit of the Hills.

On November 3 and 4, Spirit of the Hills will hold a Festival of the Arts in the beautiful lakeside town of Cobourg.  Susan and Felicity Sidnell Reid are its co-chairs. The Festival opens with a bi-lingual musical, closing with a concert and anthology launch. A book fair, art show and workshops (Susan’s leading one in portrait painting) take place between these events.

I told Susan I hope she plans a good long rest in December.

But I’m not counting on it!