It was 5 minutes to midnight, our estimated time of departure. All passengers were seated and seat-belted.

We’d been thoroughly grilled by Israeli security officers at Ben Gurion Airport — serious men and women who all seemed to be barely over twenty years old! After all, El Al Israel Airlines has been dubbed “the safest airline in the world”. 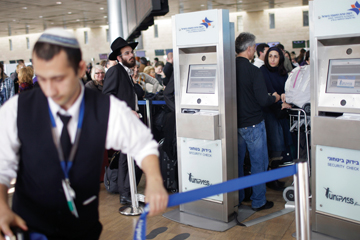 Passengers are bombarded by a stream of questions:

“Who packed your suitcase?”

“Was it always in your sight since you packed it?”

And the all-important question to ferret out trouble:

“Did anyone give you anything – a package or a letter — to deliver to anyone in Canada?”

The giant 747/800 jet, with its blue, red and yellow lights glimmering, flashing, and lighting up the Mediterranean night, slowly began to move. We were leaving Israel – the primary land of the Bible, where a group of pilgrims (all clergy) and one tour operator (I) had spent 10 days on “an incredible journey of a lifetime”, a “you-will-never-read-the-Bible-the-same-way-again” kind of encounter, as the brochure had promised.

Beside me on the plane sat Rev. Julia.  Compared to my 20-somethingth trip, this was her first time. I had not bonded with this particular pilgrim as she’d kept mainly to herself, soaking in the experience in her own way.

As the massive hunk of steel revved up to full speed and lifted off, I heard her say, “Goodbye Israel, goodbye, Jerusalem”. She wiped tears from her eyes.

I closed my eyes, silently thanking God for yet another amazing experience and prayed for a safe flight home for us all.

After a while, I broke the silence: “How was the trip for you?” I asked.

After years leading pilgrims on this journey, I knew there would be some remarkable, even unexpected, answers. People are moved by different sights, sounds and smells as we travel through the land. Our pilgrimage included daily devotions outdoors, celebrating the eucharist in Galilee and in Jerusalem, and reading scripture stories at the sites where the events took place.

On a boat ride on the lake we call the Sea of Galilee (where Jesus performed miracles), we stopped and read about one of Jesus’ miracles – his walking on water. In Capernaum, the headquarters of Jesus’ ministry in Galilee, we stopped near the excavated synagogue, beside the “house of Peter” and read about one of Jesus’ miracles of healing. At the Pool of Bethesda in Jerusalem, we read the story of one of his two  miracles of healing in Jerusalem.

Rev. Julia seemed pleased to answer my question. “Well, the whole trip was simply more than I ever dreamed, so much more than I was expecting!”

Had she paid heed to the media reports of unrest in the land, she said, she never would have signed up for the trip.   “I must say I’m so glad I did — it was simply a life-changing experience – as the brochure said!” she added.

The food, the hotels, the people, the scenery – the fast changing vegetation – and the pilgrimage itself were outstanding, she said. Then she chuckled: “And there was no one shooting at us at any time! Thank you so much for everything.”

“And what was your most moving experience?” I asked.

“Jerusalem” she replied. “Jerusalem took my breath away! I felt like I had come home.”

Then she told me about returning, as an adult, to her childhood home in Hamilton, Ontario.  She was visiting the city and was curious about her old home. She drove around the old neighbourhood then parked in front of the house. It looked a bit different from what she remembered. She rang the doorbell, introduced herself to the new owner and asked if she could come in and look around.

The homeowner graciously invited her in.  Heart pumping, she stepped inside the house – and knew in her heart it was still home! She went from room to room, savouring the memories. She stood at the place where her family’s kitchen table was – where she did her homework; she placed her fingers on the notches on a post where her father would measure the height of her sister and herself as they grew taller and taller; she saw the bedroom where her little bed was – there her mother would read bedtime stories to her before tucking her in! She was home!

“Well,” Rev. Julia, concluded, “I cannot explain it… but that’s exactly how I felt when I first saw Jerusalem. I felt like I’d come home. And,  I was very surprised by it!”

Tour Operator Claire Wade later became an Anglican priest. She is the rector at St. Thomas’ Church in Brooklin, Ontario. She has visited the Holy Land 41 times.