2015 isn’t even half-way through yet, but it’s already a big year for author-playwright Paul Nicholas Mason.

His third book, The Night Drummer, was launched to acclaim.

He became a grandfather.

He retired from teaching.

He’s writing his fourth novel and his umpteenth play.

Paul lives north of Toronto. He writes in his study at home. 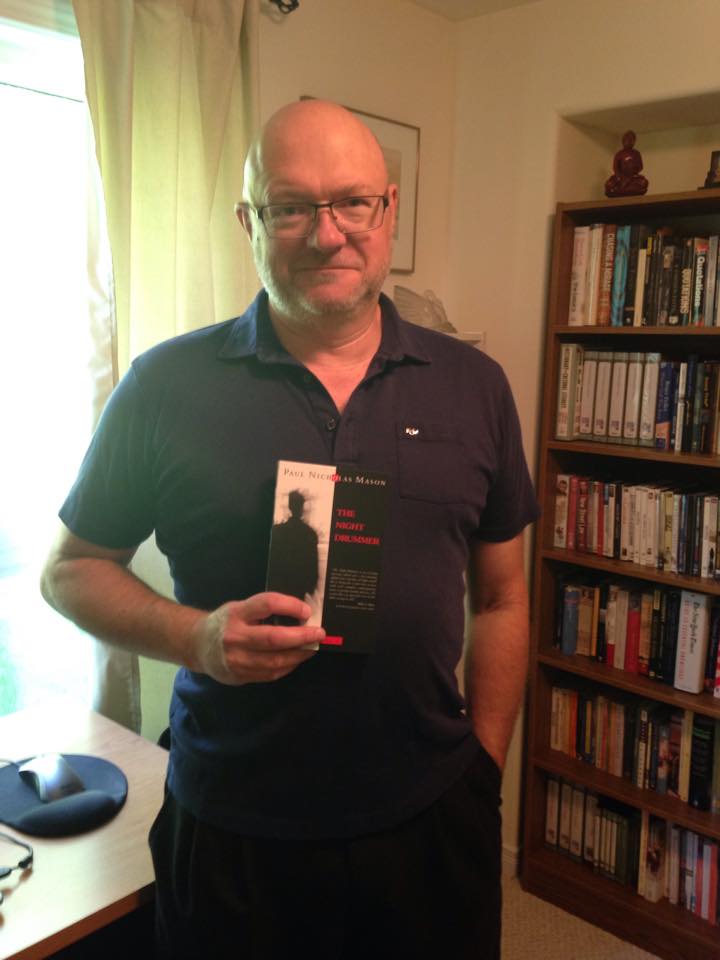 “It looks out on conservation lands at the back of my property, so my view is of trees.  Trees are very important to me.”

Not surprising that one of his most favorite places is the Rotary Greenway Trail, near his home.

“During the summer I’m on the trail almost every day.  That trail, incidentally, is the setting for my first novel, Battered Soles.”

The setting of an earlier home also provided inspiration — for the new book. The setting and some characters in The Night Drummer  are linked to Kingston, Ontario where he lived.

“Indeed, one of the characters – but only one – is based solidly on one of my high school classmates…  I don’t altogether understand my own creative process, but I can tell you that the character of Otis, the Aboriginal young man, came to me first.”

The Night Drummer tells the story of two teenagers in small-town Ontario: Peter Ellis, a white boy and Otis James, who is Aboriginal.

An excerpt from the Publishers Weekly review:

“Ellis’s memories of first loves and jobs and an endearingly oddball assortment of friends, including Otis, a preternaturally wise and kind Ojibwe boy adopted by devout Caucasian parents, give this portrait a welcome sweetness that draws attention to the innocence, sheer possibility, and blithe lightheartedness of youth. ‘Small towns can be ugly places,’ Ellis remarks, ‘but they can be warm communities too.’  Nostalgic but not sanitized, this novel shows the interplay of the two, with captivating results.”

“I loved the young people I taught, and I loved my colleagues. Teaching is a noble profession, but it is, at times, stunningly stressful.  I knew that I needed to get out while I was still whole.”

Having retired from teaching, Paul plans to write, of course.  He’s blessed with a deep and melodious speaking voice, so he’ll also do some voice work.

He’ll spend more time with family. For Paul, family is the real ‘home’.

“I am, first and foremost, a family man:  father to two children and two step-children;  grandfather to an infant granddaughter;  son to Michael and Muriel;  brother to Robin and Angie;  uncle to a niece and two nephews;  and partner to Denise.”

Underpinning the different parts of his life is what Paul calls his “moral scaffolding”. He describes himself as a liberal Christian.

“I’m the furthest thing imaginable from a Bible-thumper, but I am, quietly, a believer.  I don’t think a reader would necessarily pick up on that from reading any of my books, but my faith provides a kind of moral scaffolding.”

And his hopes for The Night Drummer?

“I hope it will move many readers to laughter and, perhaps, to tears.  And I hope, beyond that, that it will encourage them to be a just a little kinder to each other.”