Nor did being a journalist equip me to write book reviews.

So while I buy and read other authors’ books, until I published my own first book, I didn’t take the next step and review them.  I feared I wouldn’t sound wise enough, that my analysis would be inept. Perhaps that’s why I’ve been timid to ask readers to review my own books.

And therein lies the issue. Authors need reviews. But if we ourselves are too timid to review books and too timid to ask it of others, we have a problem.

My readers have no problems writing me letters — even very long letters — stating why they enjoyed my books. But writing a review can be a fearsome thing, one that seems to require expert writing and story analysis skills that many readers believe they don’t have.

And why should they? They didn’t go to Book-Review School either. They are readers, not professional book reviewers. They’ve bought or borrowed a book, read it, enjoyed it a little, or a lot, or not at all.  And then they went on to the next book. Or perhaps to do the dishes.

If we’d like readers to review our books, there are a few simple things authors can do to help:

For starters, could we replace that word “review” with “comments”?

Check almost any online store and you’ll find dozens, hundreds, even thousands of reviews of the products they sell.  Shoppers seem to have no trouble posting online comments about the things they buy online – despite the fact that those comments appear under the heading “Reviews”.   But mention the term “book review” and many people get flustered, even anxious.

Second: Tell readers how to do it.

I’ve had readers tell me they wanted to review one of my books but had never done a book review before and didn’t know how.

I explain that “a single sentence saying why you liked or didn’t like the book is perfectly fine.”

“If you wish”, I usually go on to say, “you can also explain why you would recommend/not recommend that book to others. But you don’t have to. A short comment is fine.”  I can almost hear the relief in their responses.

And here’s a surprising outcome: while some of my readers do just the above and no more, at least as many go on to write longer and more substantial reviews.

Third: Tell the reader where to post online reviews

A book-lover wanted to review a book she had just read. She knew what she wanted to say, but had no idea where to post her remarks. She had never heard of Goodreads and wasn’t in a hurry to find out, but she had bought the book online from Amazon and was happy to leave her review there.

Once I showed her where to post her remarks (Look down the left side of the Amazon book page and you’ll see “Review this Product” just below  “Customer Reviews”), she was off and writing.

Share your thoughts with other customers
Write a customer review

I’ve not done this in my own books yet, but I am now considering including a short note of thanks (in the back of the book) to everyone who, having read one of my books, would like to leave a review.

Perhaps I will give the reader a few tips about how to do so as well.

After all, if there is a Book-Review School, no reader I know has been there.

What do you think, Reader? Please leave a comment. A single sentence is fine!

Not a single book sold today…

We think think this maybe the first time ever…

We know its miserable out but if you’d like to help us out please find our Abebooks offering below, all at 25% off at the moment…. 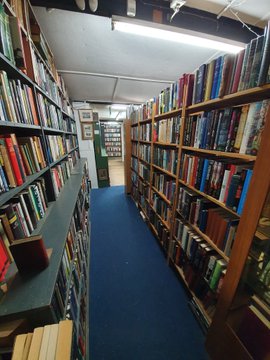 I’m not blogging as often as I should, but I have good reasons!

We’re in the busy period of launching not just one, but two books: Twigs in My Hair and the third in the Myrtle the Purple Turtle series, Myrtle Makes a New Friend.

This evening, the Toronto launch is being hosted by A Different Booklist, the iconic bookstore and cultural centre that carries exciting books from around the world.  Owners Itah Sadu and Miguel  San Vicente and their team have sold our books for years, and I am always glad to visit with them and their customers.

All of this is happening as younger daughter Lauren Reyes-Grange, co-author of the Myrtle books, and her husband Dan, are expecting their first child this month.

So we’re all hoping Baby holds off a bit longer so it won’t be a triple launch tonight!

Twigs photographer Hamlin Grange, Lauren and I started out a few weeks ago in the most special way: our church, St. Thomas’ Anglican, held a double blessing for the books and us.

Our priest Canon Claire (above left),  and Corinne Sargent, head of the Women’s Reflection Group and the team of volunteers, and dozens of enthusiastic parishioners made it a wonderful breakfast event in the parish hall.

Every detail was a celebration of the books and their key messages.

Even the hymn “All Things Bright and Beautiful”, was slightly altered to include a purple turtle!

As always, Canon Claire’s prayer made us feel blessed and supported.

Tonight, at A Different Booklist, we will celebrate with a whole other set of friends and acquaintances (some of whom we haven’t seen in way too long), and meet new people who love books.

Hamlin, whose beautiful pictures grace the pages of Twigs in My Hair, will play a slide show he has created for this purpose. Lauren and I will read short excerpts from the books and perhaps make a few remarks.

Writing is a lonely activity. But I am lucky to have a truly caring and professional team: Lauren and Hamlin as key creative partners, fabulous illustrators (Jo Robinson on the Myrtle books, and Les Lawrence who did the humorous sketches for Twigs), excellent beta readers, proficient editors, proofreaders, and our book designer Clif.

So it’s a double celebration this evening. And we hope the biggest celebration of all — a brand new baby in our family — holds off just a little.

Photos of the St. Thomas’ Church event were taken by Joanne Schuetzl.

Sandra Whiting has a way about her. When she asks for a favour, it’s hard to refuse.

Between her personality and track record for getting things done, she’s admired by many.

Add her contributions as an arts-supporter and artist (Sandra is a storyteller with a great sense of humour)  to her voluntary work for Canada’s Black and Caribbean communities, and you get the picture.

But that didn’t make me immediately accept her invitation to give the keynote speech at the premier annual event of  PACE, the charitable organization she leads.

I love PACE.  It’s helped tens of thousands of children in Jamaica and Canada. But I hadn’t given a keynote speech since the car accident of over a decade ago and the very thought was frightening.

My husband intervened.  He reminded me that at each stage of my recovery, I have done something that terrified me, and that, even when the results were miserable, I usually felt better for trying.

Further, the topic was something I knew well: What we can teach children and ourselves from gardening and nature.

“You won’t stutter and they won’t hate you,” he reassured.

So, with a lot of help and encouragement, I said “Yes”.

Having said “Yes”, I was even more scared. What to do?

Surprised, for two reasons. First, it was almost completely written. I’d thought it was only partly done. Even more surprising? It had been professionally edited. How could I have forgotten that?

The answer came quickly. I had forgotten because my beloved husband had become ill and nearly died of a pulmonary embolism. I had put everything aside in the frantic weeks and months that followed.

My husband is a courageous man. I watched him fight to recover, despite frequent frustration over his illness.  His bravery and sheer grit were so obvious, they inspired me to return to a tough subject I’d been avoiding: what it’s like to keep pushing ahead, to try to squeeze every moment of joy from a life painfully changed.

So, instead of the gardening book, “An Honest House”, based on my personal journals, was published in 2016.  It won The Diamond Award for book of the year.

My husband recovered and returned to being a highly-regarded consultant and public speaker. This man knows how to create a strong speech.

We chose three excerpts from the unpublished gardening book, and built a speech around them.  I realized I could simply read whole parts of the speech, as I’d done at author-readings.

We arrived at the event. Inside, people were already admiring the flowers at the Enchanted Gardens sale. There was a joyful feeling everywhere.

Several people approached me. They had bought their tickets because I was the speaker, they said.

My husband helped me up the steps to the podium. At our table, my daughter and son-in-law sat, supportive, encouraging.

As I looked out at the large audience, I recognized several people I knew. They were smiling, beaming love and support.

Even strangers beamed encouragement, I think. Though they might have still been smiling over the introduction. Maxine, the woman who introduced me, told everyone what I’d written in my bio but also forgotten: that I’m a terrible cook, knitter and floral arranger.

I started to speak, then read, growing more confident as I went along. There were times when people seemed glued to what I was saying. They even laughed at the right times. That was a relief, because I’m a terrible joke-teller too.

It still feels like a miracle that I got through it, and that it was well-received. But I did and it was.

And now, in a touch of grace, I will have two books published this year.

First, of course, is the new children’s book in the Myrtle the Purple Turtle series, co-written with Lauren Reyes-Grange and illustrated by Jo Robinson.

The gardening book will also debut. Years after it was put aside, this book will see the light of day — because I said “Yes”, and decided to do what scared me.

Dedicated to Sandra Whiting and the children supported by PACE.