John Garside and his wife Ann sold their home in big-city Toronto last year and bought a house two hours away in Prince Edward County.  They’ve been living in a condo nearby while John renovates the house.

Prince Edward County is known for small towns, farms and lakeside living.  In the last decade, its vineyards and wines, fine cheeses and restaurants have also become popular. The County is a well-known mecca for artists and weekenders.

John has bravely promised Ann that they’ll be able to move in by the end of April.

But their “new” home  is more than a hundred years old, huge — almost 4,000 square feet —  and needs repair.   John, who has never taken on a project of this scope, is doing almost all the work by himself.

The first room he tackled was “The Green Room” on the main floor.

“It was the worst room in the house, ”  he says.  “A water leak from the 1980’s had caused a great deal of damage to the plaster ceiling, walls and the crown moldings.”

John took on the challenge –– very carefully.  He rebuilt ceiling, walls, and even the crown moldings.

“I repaired what others would have scrapped, and I did it all by myself!  And I had never done anything like this in my life!”  You can hear the joy in his voice. 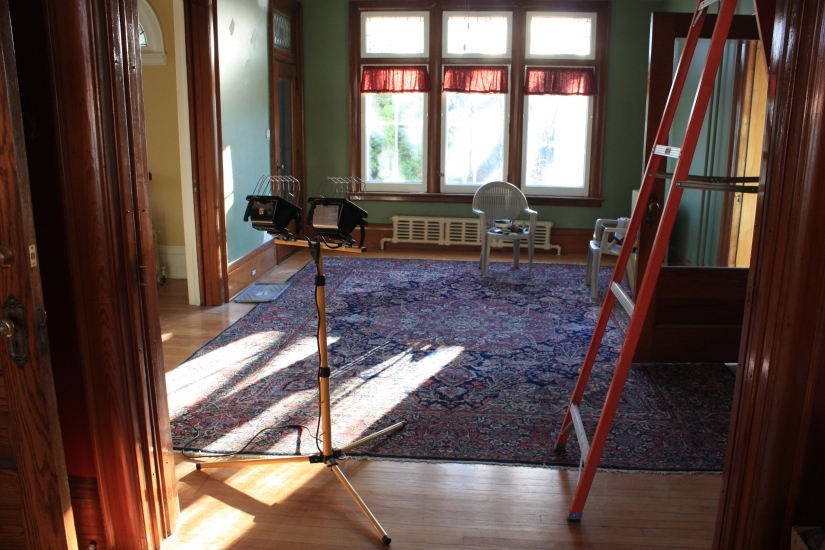 Every time he looks at the room,  John feels “a glow of satisfaction and a sense of oneness with the house”.

The house is full of beautiful features worth preserving.    John has to proceed cautiously.

He says, “You think about each action a great deal before you act. That way the unpleasant surprises are held to a minimum.”

The skills he learned from his grandfather — extreme patience, careful planning, attention to detail and observing safety rules –are all essential right now.  ‘Measure twice, cut once’ is the rule.

“You must understand,” he says,  “that the project you are working on is not modern, but 100 years old. So you must take time to think about what you are about to do, and plan in detail how you are going to achieve success.”

John puts in 8 hours every day — and no slacking off.  After all, the end of April is just around the corner.

Will he make the deadline? We’ll keep checking in.