Would you leave a very comfortable house in the city – a mansion, even by Toronto standards – to live in a dilapidated 1800’s farmhouse in the middle of nowhere?

I, as you know, have lived in interesting places. But when former model and media manager Wendy Boothman told me what she did 31 years ago, even I was surprised.

In 1986, the Boothman family decided to move to the country. They found a large log house in perfect move-in condition. Wendy’s husband and children loved it. 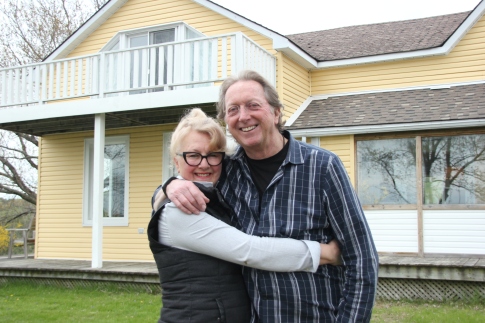 But Wendy wasn’t sold. Without telling her family, she kept looking. She asked the realtor to show her a place in Kendal, a hamlet northeast of Toronto. They toured the property.

“It was a hot August day and the poor realtor was in his suit and tie. I had no idea what 140 acres meant, so we ended up walking and walking.”

They also toured the house. Wendy said she loved the place. 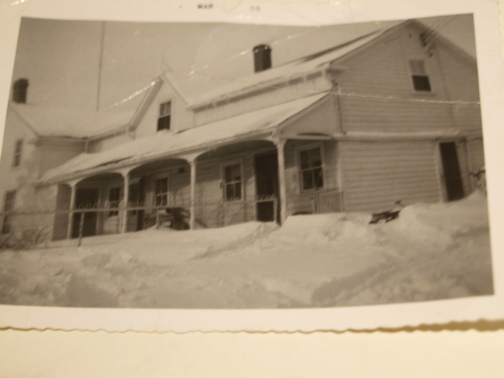 The shocked realtor replied: “Wendy, it’s so dilapidated! Look at the holes in the floors! You have 5 children and a housekeeper. You can’t live here!”

Husband Nick saw it next. An international fashion photographer and audio-visual director with a Toronto studio,  he was stunned.

“Woman!” he said. “You’ve finally flipped. I refuse to set foot in that house!” 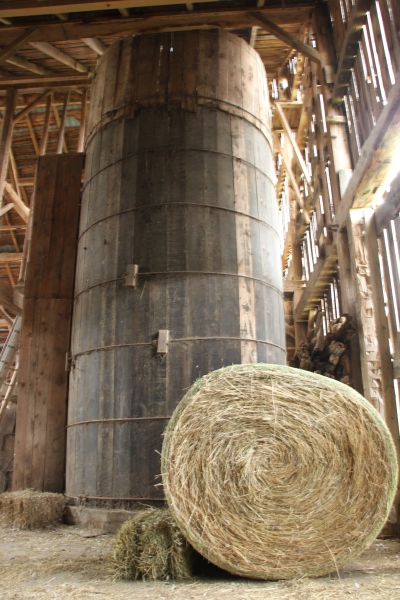 Wendy showed him the huge wooden barn with cathedral ceilings. Then she drove him up to the highest point of the property and showed him the view.  He was impressed… somewhat.

“We’ll renovate the house to what we want,” she reassured him. “We’ll design the garden to what we want. But most importantly, the children will be part of the designing. They’ll decide on the pool, their rooms, and so on.”

“If you think the children are going to want to leave a Toronto mansion to camp out  here while we do all the work required, you have another think coming,” Nick protested.

This was a daunting challenge.

Then Nick relented. “If you can sell the kids on this move,” he told her, “we’ll do it.”

One Sunday in August, Wendy and Nick took the kids on a long drive, turned off a country road and drove up to a hill with an impressive view of the area. 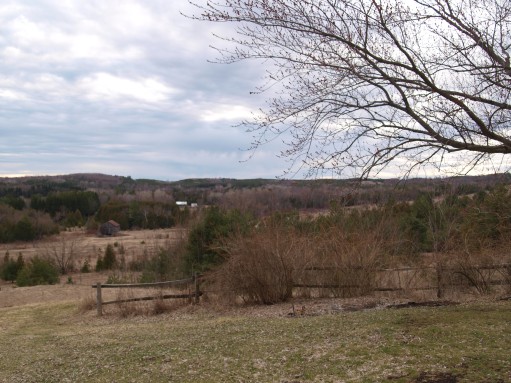 “What are we doing here?”

“We’re having a picnic in the country!” Wendy replied, smiling. “We’re moving to the country, so we may as well get used to it.”

After the picnic, the seven of them trooped through the fields and peered into the forest, excited.

Walking down the other side of the hill, the children spied a house and asked if they could look inside — not knowing their mother had a key.

They saw the tiny rooms, the old kitchen, the holes in the floors… the whole catastrophe.

But when Wendy took them into the barn, they were awestruck. 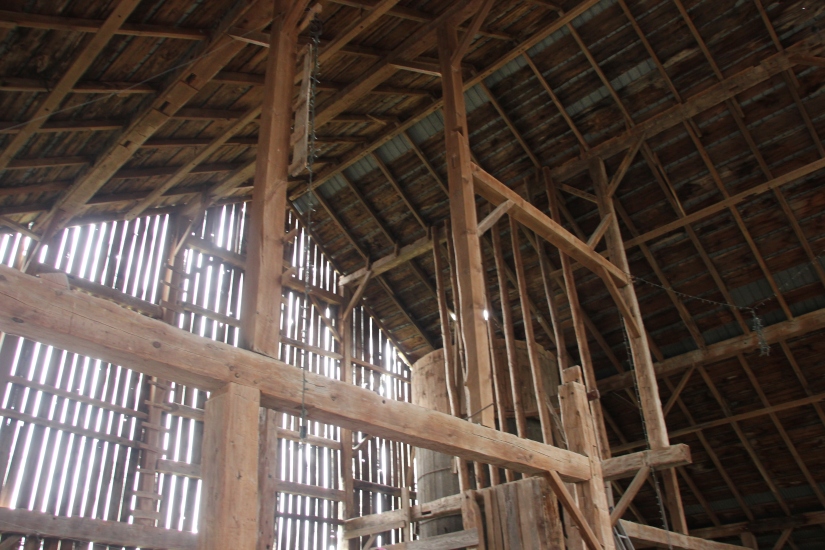 “We can move into the log house… or we can get this place and design it together. Your friends can come on weekends. We’ll have horses – you can ride. Can you imagine if we had a pool on the side of a hill and gardens?”

They returned home to Toronto, and started drawing up plans together.

They moved into the house on Halloween that October.  Wendy, who knew nothing about school buses, sent the 2 younger kids to the wrong school the first day.

That winter was full of challenges. For one thing, the house was freezing cold.

Both parents still worked nearly 2 hours away in downtown Toronto — Nick at his studio, Wendy at her media management and design office.  Every morning, he drove the 3 older children to school in Toronto. Wendy picked them up every afternoon.

A year later, she decided to move her business to her home, creating one of the first “virtual teams” in Canada.

That eased a few challenges on the home-front. But renovating the house and landscaping the grounds would become a huge, 4-year project.

In 2014, I ran a series about Valerie Rowley, her husband Chris and their lovely home, garden and pets. 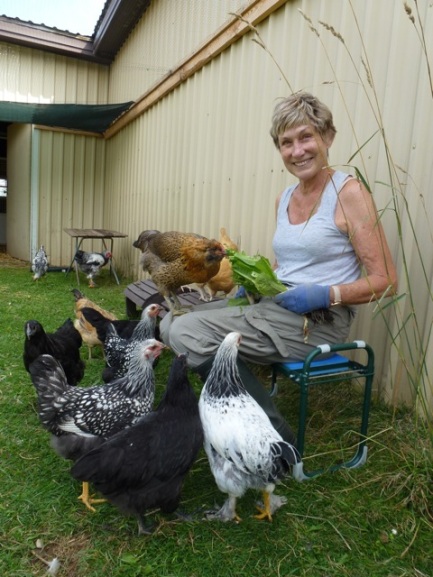 I was impressed by Valerie and Chris’ relationship – their obvious love and respect for each other.

I also liked this fact about them and their home: despite being an interior designer herself, Valerie didn’t renovate her home all at once. It took 20 years of patience and work. And though she created a beautiful home, it was above all, designed for comfort.

When Val’s illness worsened recently, my heart hurt for her and Chris and their family.

I remembered how she and Chris generously shared their home with my blogging community, and your warm responses to the series. So, knowing that Valerie loved flowers, I asked some of you to send a photo of your favourite flower for her. Many of you replied by Facebook or directly to my blog.

Valerie was very thankful for those flowers.

Valerie died yesterday. She was surrounded by Chris, her daughter and son and grandchildren, and other loved ones. We wish and pray for comfort and strength for them at this tough time.

Some people have a special touch for creating beauty — in one’s surroundings, and in one’s heart. Valerie touched people in this way. In addition to being a gifted and well-known designer, she was a very positive person who had a way of lighting up a room with her sense of humour, frank talk, unpretentious ways and that beautiful smile.

“Have I ever told you how much I love your spirit?” I wrote in what would be my last email exchange with her. “You draw people to you because there is a kind unpretentiousness about you, and an interest in others. I took to your presence like a duck to water … the warm look of welcome on your face, and the delight when you laugh, are  lovely.”

I am thankful to have known you, dear Valerie.

Prayers for Chris, Tamsyn, Jon and all who love you.

I’m not talking to my husband.

The problem  is that I can’t remember why.

“How can you be mad at a person and not remember why?” he asks in disbelief.

Which makes about as much sense as holding a grudge for something you can’t remember.

“Did you have another dream?”

There was the time, long ago, when I dreamed that a woman flirted with my husband.

I woke up the next morning and was very upset with him.

“Was she pretty, at least?” he asked.

“This is not a joking matter,” I replied huffily.

“But why are you blaming me? SHE was the one who flirted!”

“Well, you were probably encouraging her!”

“So you’re blaming ME because some woman flirted with me — in a  dream?” He asked.

“But it wasn’t even MY dream!” he protested.

Now, what the heck had he done this time? I couldn’t remember.

It wasn’t because of The Case of the Missing Ski Sock.

Although, I was pretty mad at the time.

“Are you sure you didn’t put my sock somewhere?” he kept asking. “That’s my expensive ski sock.”

So of course I went looking.  Hours later, I’d completely re-organized his very messy closet – but still no sock.

He had learned early on that if he accused me of removing his keys, pen, wallet, cell phone, socks — you name it — I’d go searching till I found the darned thing, right where he had misplaced it. But it took me decades to catch on. Decades. Yes, I’m really that daft.

Now, if only I could recall why I’m mad at him this time.

How can I forgive and forget if I can’t remember?

Dedicated to all loving partners who con their spouses into finding things they’ve lost — and to the loving, crazy people they live with.

David Walton-Ball opens the door of his summer home, east of Toronto, and is greeted by a child looking up at him:

“Can Sandra come out to play?” 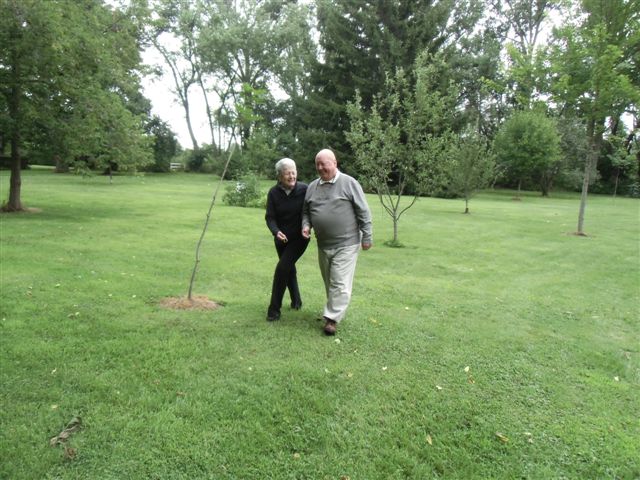 Sandra — you may be surprised to hear —  is not a child. 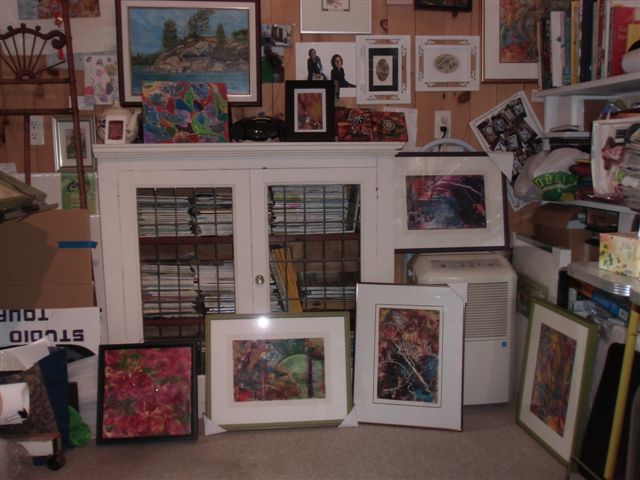 She’s David’s wife, a talented artist whose work hangs in galleries in Canada and Mexico. 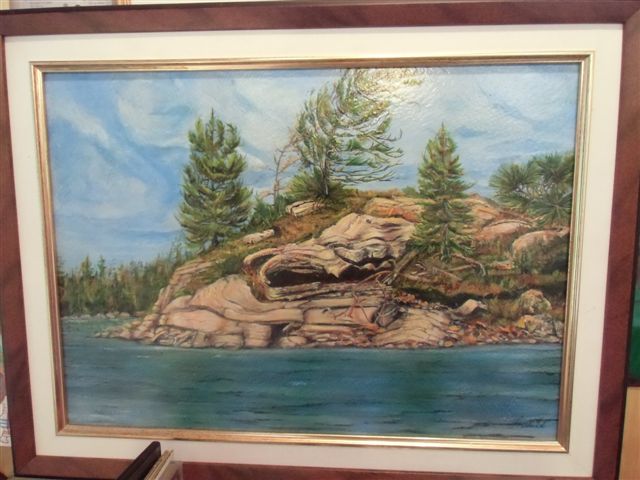 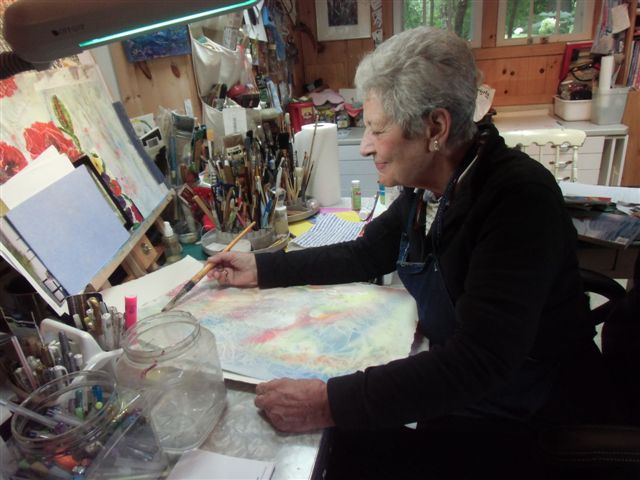 Neighborhood children gravitate towards her and she loves them. So she teaches children to create their own artwork. 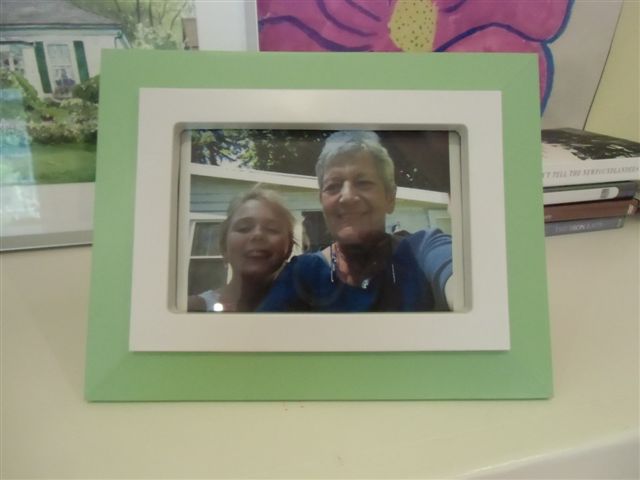 She and the children have developed a system at her small studio at the summer house. 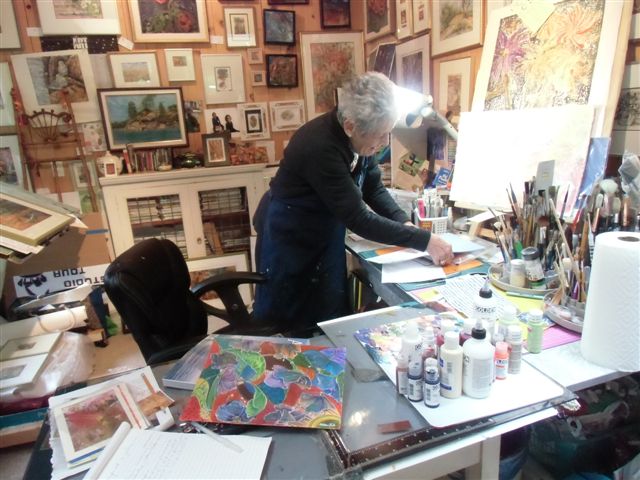 If this sign is up, Sandra can’t come out to play. 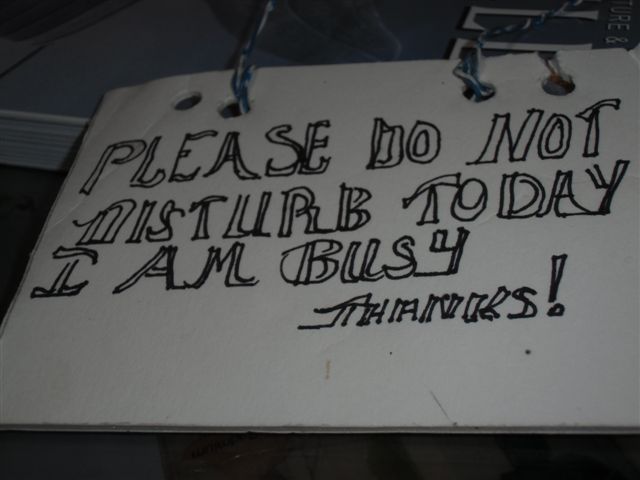 In Mexico where she and David spend the winter, Sandra teaches art to children whose parents can’t afford to pay for lessons.

“We put on Andrea Bocelli and the children sing along.”

San Miguel de Allende is home to many artists from Canada and the U.S. 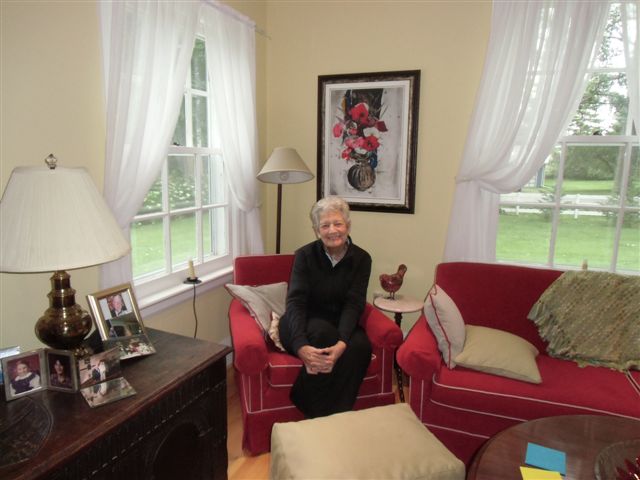 Years ago, Sandra met Leonard Brooks, an esteemed artist who started the Canadian and American migration to San Miguel. They became friends. That’s one of his paintings behind her, above.

Music playing, the children in her studio sing and paint. This is her gift to them and their families: encouraging the children’s creativity. She introduces them to the styles of Mexican artists such as Frida Kahlo. 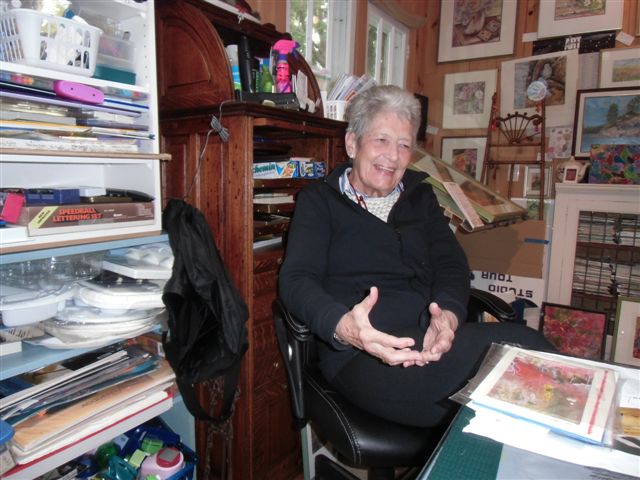 You wouldn’t know that, nearly 20 years ago, Sandra was so ill, she was on life support for months. It took her 15 years to start painting confidently again. 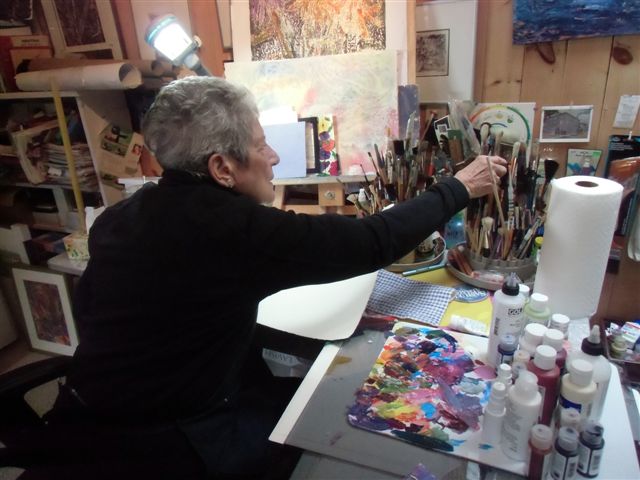 Once recovered, she decided to take more risks with her art. And so wherever she is – in Owen Sound, the family’s main base, or in San Miguel de Allende, or here at the summer home near Toronto, she’s painting – doing “gutsier and more experimental work”.

“When something happens to disrupt your life, you recognize that things can happen and you may not get a chance again – so you start taking risks.” 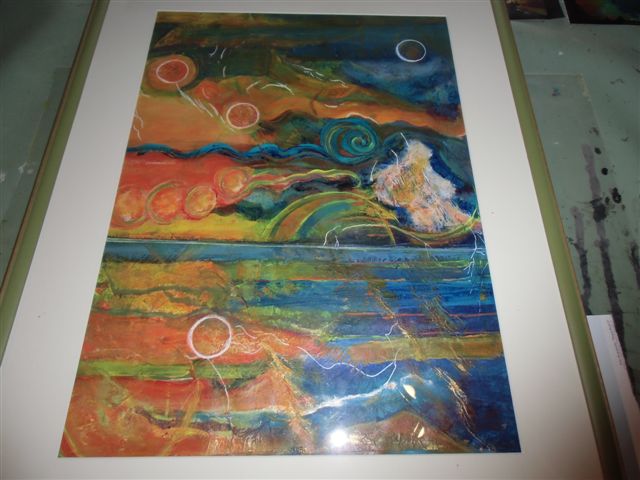 David hired someone to turn half of the garage into a studio with skylights, and there’s been no looking back. 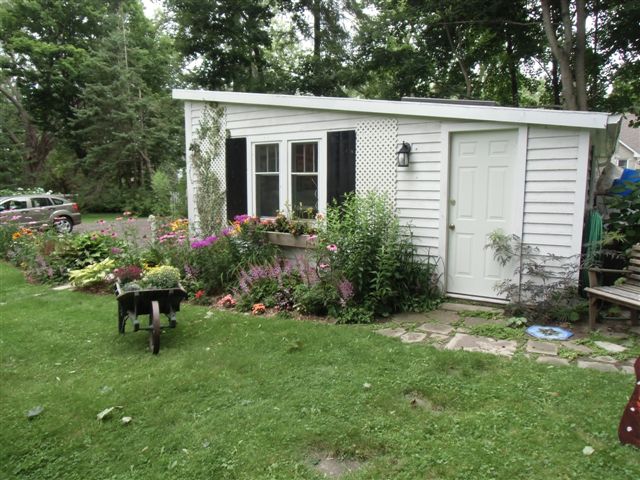 Generations of the Walton-Ball family have lived in Historic Bond Head for about 150 years.

During World War 2, the family planted and supplied potatoes to all their neighbours.

(Another historical tidbit: David’s first ancestor in Canada is the “Walton” for whom Port Hope’s main street is named. Port Hope, a famous heritage community, is near Bond Head.) 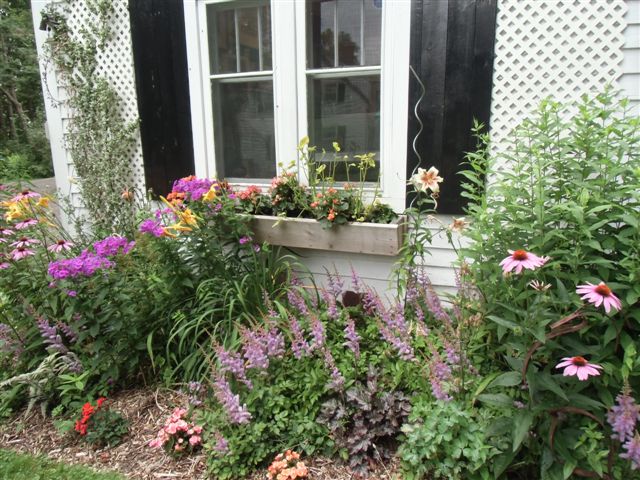 Through 50 years of marriage, Sandra has seen how special the place is to David. It’s grown on her. 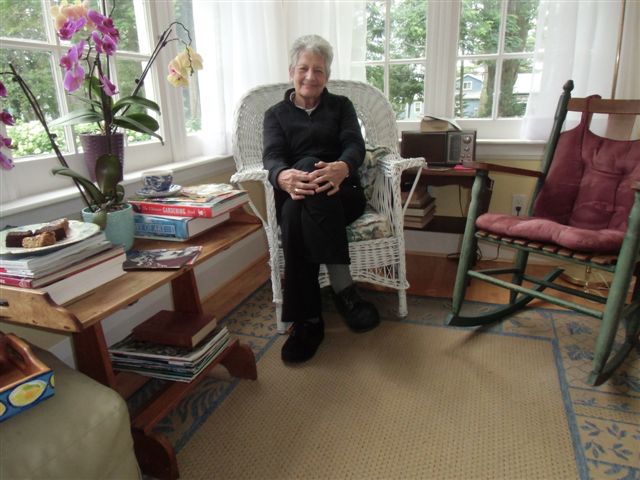 “I fall in love with it each summer. Each year my garden grows. And now, like Virginia Wolfe, I have a room of my own, so it’s easier to find my heart.”

They love this place for the history, the house, the studio, the family times, the garden and the orchard. Some of the apple trees are more than a hundred years old. 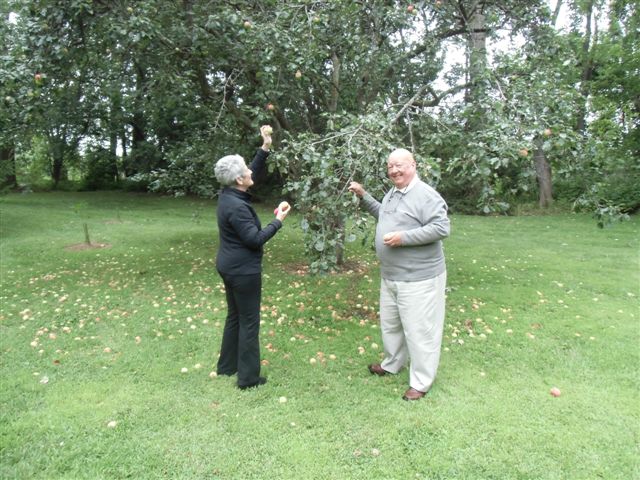 One summer, Monarch butterflies visited Sandra and David here. (Monarchs fly from Mexico all the way to Canada each summer and back.)

“You couldn’t see a leaf,” Sandra says. “The trees were covered with Monarchs.”

That magical event led to this painting…. 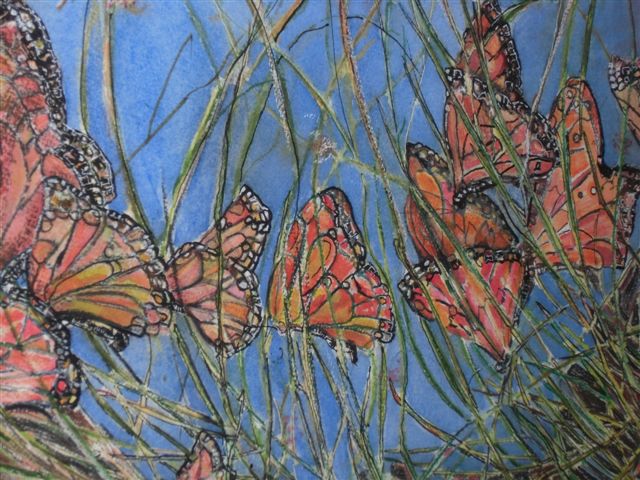 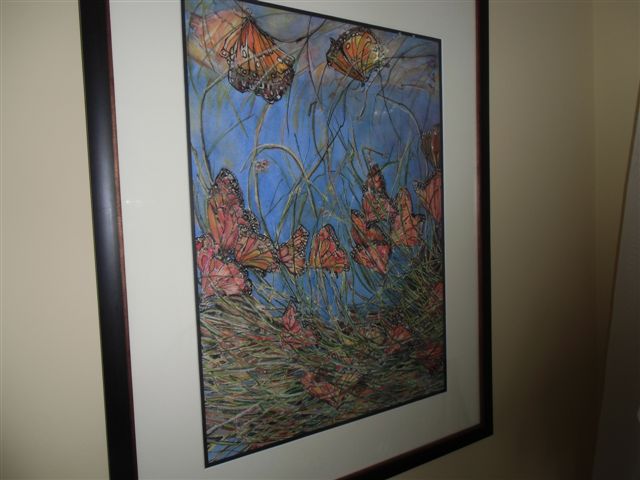 … and a gift: a butterfly chair from David. 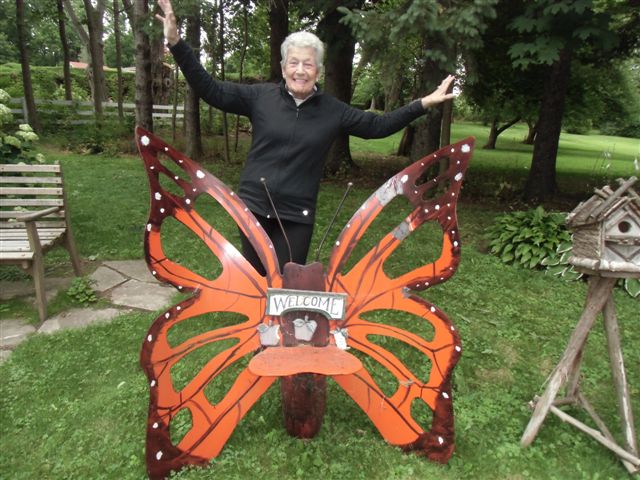 “Perhaps the Monarchs were saying thanks for all your good works with the children in Mexico?” I ask. 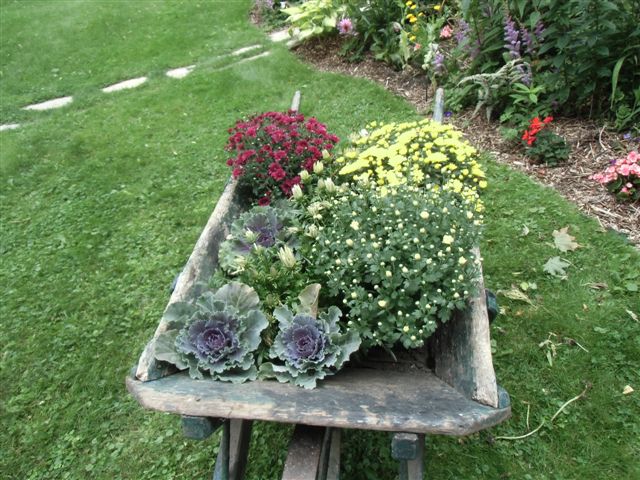 To learn more about Sandra’s work, or to acquire her paintings, email: swaltonball@gmail.com