Maybe — now that I’m going to become a children’s book author — my blog should become more respectable?  I hope not. But just in case, I’m sharing this post before Myrtle is published!

The “Ungodly Godmother” of one of our children drove hours on her first day off work to visit me after my recent mishap.

Time spent with her is a gift. She’s caring, smart, and makes us laugh. Updates about her life, her town, mutual friends — are all told in witty, ironic and ‘salty’ language.

It’s partly why our children have always loved her. The laughter. And because she was that rare adult who didn’t clean up her language when they entered a room. Thus the name she gave herself: “The Ungodly Godmother”. 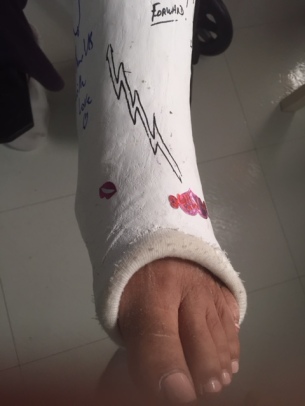 Before she left our home this time, she autographed my cast.

Not that I could see it clearly.  Too far down the cast, near my heel.

We hadn’t been to church since I fell and injured myself.  I’ve missed the quiet Sunday morning rituals, the readings from the old Book of Common Prayer, in our tiny historic chapel. 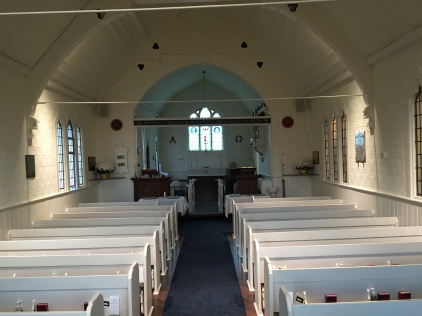 So my husband and I were grateful when the priest called, offering to bring us communion.

Father Tim spread a handkerchief-size white tablecloth on our coffee table, then placed two tiny gold jars on it, his prayer book to one side. He read a prayer for the sick, and Hamlin and I followed along as he read. He opened one gold jar and gave us the wafer (the bread), then opened the other and anointed our foreheads with consecrated oil.

The sacred ceremony complete, we got to talking about light and pleasant topics. You know:  politics, journalism, original sin.

Before he left, I asked him to sign my cast.

“There’s room next to Liona’s.” My husband pointed to the space next to Liona Boyd’s signature and drawing of her guitar.

She’s a famous classical guitarist and Father Tim, a fan of her music, happily placed his signature near hers, complete with the sign of the cross. 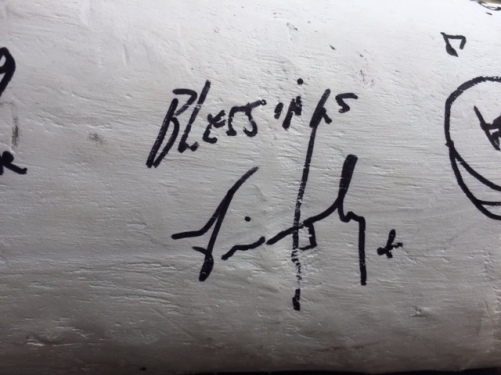 Days later, I saw my husband’s photos of the cast and made a surprising discovery.

To the right of Father Tim’s signature was Liona’s — yes. But to the near-left was the message from our dear friend, The Ungodly Godmother.

It said, simply: “Get this effing thing off!”

“Do you think he noticed?” I anxiously asked my husband.

The Ungodly Godmother had struck again.

48 thoughts on “The Ungodly Godmother”