Kendal, northeast of Toronto, has many heritage properties, some dating back to the mid-1800’s. That’s why it’s the focus of Clarington’s Doors Open architectural conservancy tour on June 10th 2017. 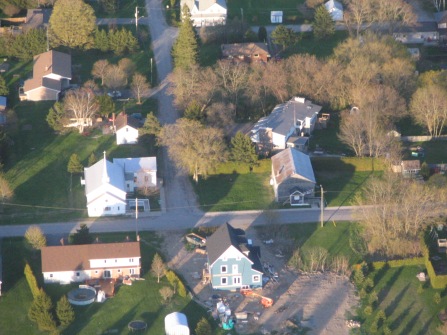 The Grange — Wendy and Nicholas Boothman’s farm property — will be a highlight of the tour. 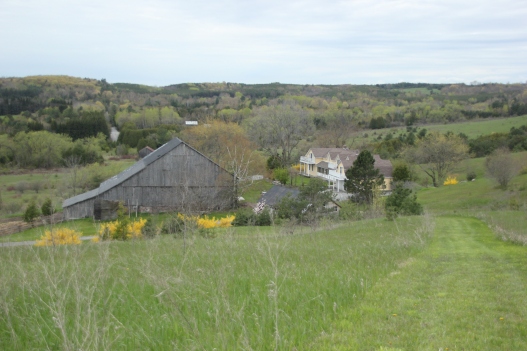 So will “Southwinds”, below.  Visitors will be be able to see these houses, barns and properties up-close and learn about their architectural and family histories.

Also known as “The Marr House”, Southwinds was built of cut-stone in 1845 for Scottish immigrant Alexander Marr and his family.

Marilyn Morawetz, leader of Doors Open Clarington, says The Grange and Southwinds are excellent examples of their era.

“Both represent typical architecture at the time by or for families with much to contribute to the early development of the Kendal and Orono areas.  Even the barns on both properties are wonderful examples of architecture and life at that time.”

But let’s return to the Boothmans’ grand adventure in country-living and renovating.

The renovation would take 4 long years.

But the family loved their home, even before it was completed. So did friends, who visited on weekends during and after the renovation.

Finally, all the major work was done. The barn foundations were repaired; the house was made comfortable; the pool and garden put in; the planned extension and verandah added.

The results were beautiful. 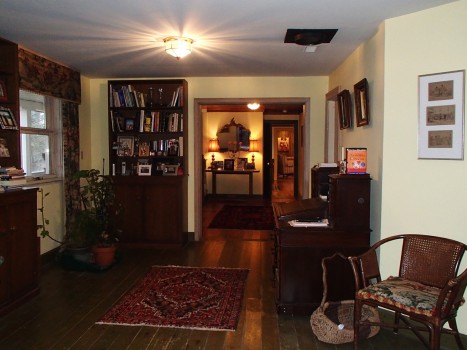 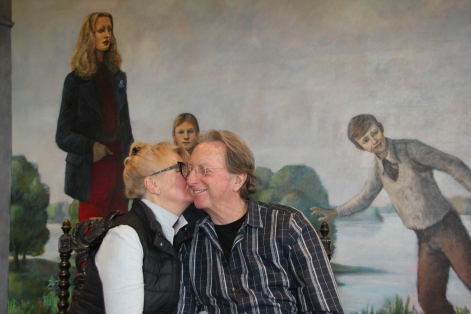 With a comfortable house, a sturdy barn and farm animals, 140 acres and spectacular views, the farm was also a gorgeous setting. Nick says:

“After we were well settled at The Grange, the outdoor Shakespearean group Driftwood Theatre Group were looking for an outdoor venue for their first dress rehearsal and they found the beautiful settings at The Grange, perfect. 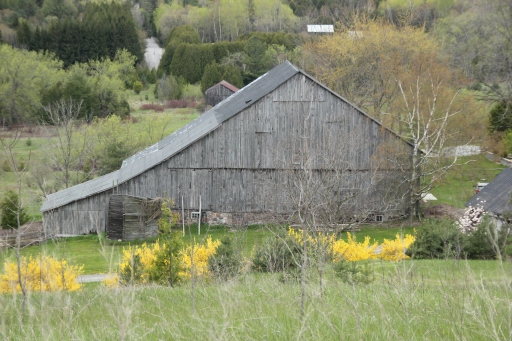 “So for 6 years in a row, we would have great fun inviting friends and their families from the area and Toronto to join us for an outdoor performance of Shakespeare.  Their first season was Romeo and Juliet.

“It was fun and we like to think it gave Driftwood Theatre Group a good start on what has become a very successful annual attraction in Durham Region and beyond.”

Life, of course, has its ups and downs.

The children told Wendy: “Mummy, we’ll be okay. You focus on getting Daddy better.”

Wendy set a rule: there’d be no sadness and feeling sorry around Nick. At 5 p.m. every day, they held ‘happy hour’ in the bedroom and opened a bottle of red wine. She told visitors only funny stories and positive talk were allowed. 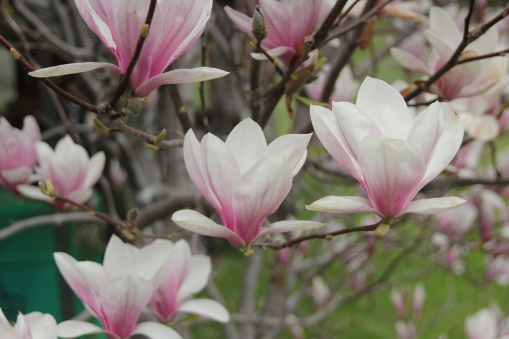 But one day, Wendy “needed to explode”. She drove up the hill to the spot where the whole family had gathered that first day for the picnic, got out of the car, dropped to her knees and banged on the ground with her fists, and screamed.

On her way back, a huge stag stood in one of the fields, staring at her. It didn’t flinch as she passed.  Wendy felt the stag was saying: “It’s all going to be okay”. 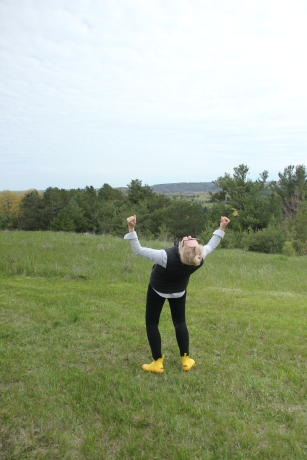 From that day, whenever anyone needed to scream about something happy or sad, they’d go to that spot. Today, friends still call to ask if they can go up there and “have a scream”.

That’s how the spot got its name: “Wendy’s Screaming Hill”.

Photos 1 and 3 by Doors Open Clarington

All other photos by Hamlin Grange

See More Photos of the renovated Grange in Part 4!

Before the car accident, I was busy leading the big projects, travelling here and there.  Running around trying to change the world can make a person miss the beauty of “ordinary” things.

Injuries and pain are indescribably worse.   You finally have time to see, but barely have the energy to look. 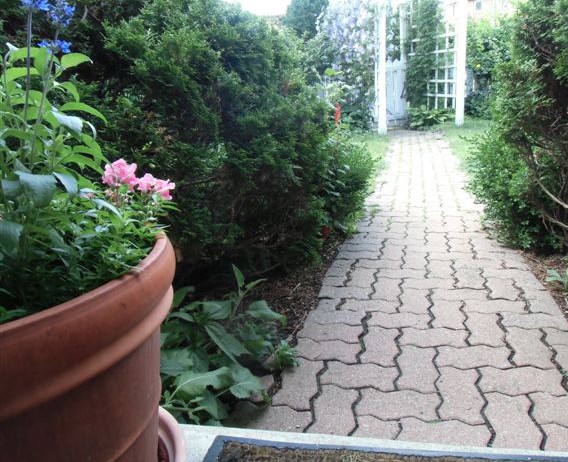 To  see one’s surroundings with new and grateful eyes.

To take joy in the small moments.

To be open to small patches of everyday glory.

Snow on evergreens. The first snow makes the garden beautiful, day and night.

The late sun. Late afternoon sunlight shining on wood floors is magical. And when the late sun hits the wavy glass sidelights in the front door of our old farmhouse, it’s wondrous.

My husband’s truant socks. He has tons of single socks and we spend time searching for their matches.I used to get irritated by this.  Or by newspapers strewn across the breakfast table. (Or his overlooking my small attempts to ‘cheer up’ our house.)

Now, I call them “signs of life”.  And I give thanks for having someone kind, funny and loving to share my everyday life with. (And I try to assemble the newspapers without muttering.)

Freshly washed sheets.  There’s luxury in the smell and feel of freshly washed cotton sheets although they’ve been used and washed many times.

The old wool blanket. “Canadiana”, for sure, it would be worth something, unstained. Do I care about the stain? No.  I love this blanket for its brilliant stripes – and for having survived decades of use.

Our family’s big mixing bowl.  Many apple pies have been mixed up in that beautiful old bowl.

My daughter’s dogs.  Sometimes, just the sight of them gladdens my heart. One brownish-black, one white, they’re both tiny dogs with personalities of their own. As I write, they’re stretched out beside me,  fast asleep.

Slowing down  by choice is great. Being forced to do so is awful.

But in the spirit of lighting a candle and finding my way out of darkness, I’ve been focusing on positives.

And keeping both eyes open for the everyday kind of glory.

This post is dedicated to the caring staff at the pain management centre of Toronto Rehabilitation Hospital. One of the techniques they teach their patients is mindfulness.

Every so often, I wish I had a well-behaved garden.

The kind where everything does what I want, when I want.

But this I know:

Real gardens offer up surprises each week, each day and sometimes, each hour. 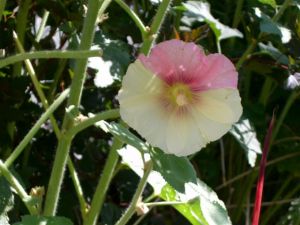 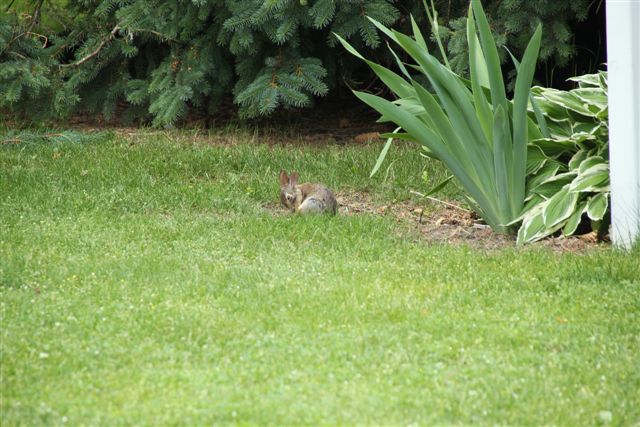 Cleaning themselves without a care in the world.

She must have squeezed herself under the fence.

This ant, dragging a dead moth many times its size. It took the moth way across the verandah. 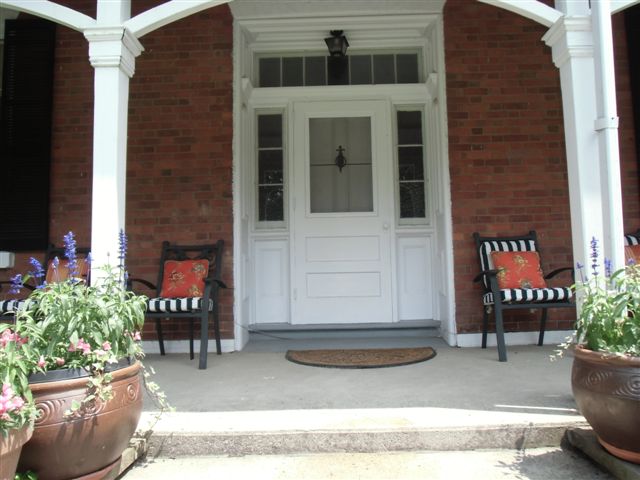 This beet, expected to be dark red, is somehow orange.

A single squash. It’s from a vine that strayed from our neighbours’ squash plantation. 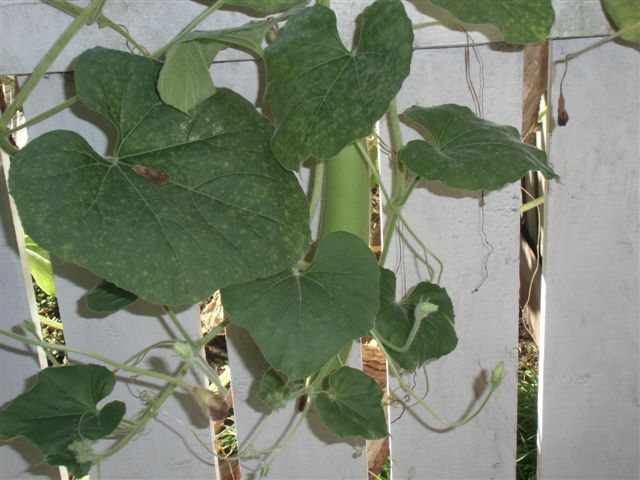 “It’s yours”, he says. The thing will grow to almost half my height. No kidding.

These onions, because they delight and surprise me each late summer.

And the garlic, just because the sight of them when newly harvested always surprises me.

The sight of our daughter’s little doggie, coming around the corner at full speed. Well, sort of. 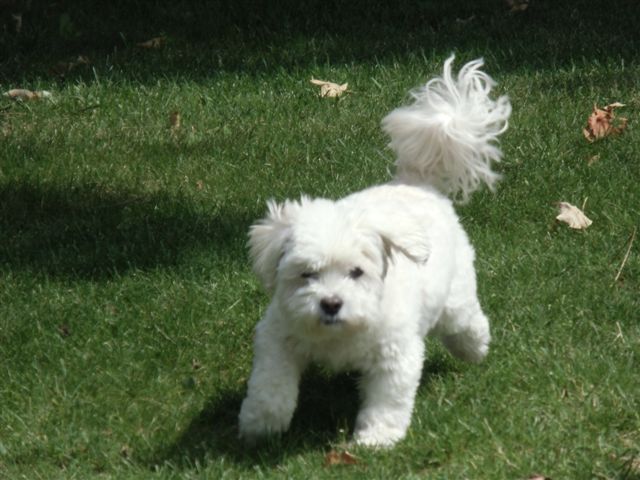 And this shadow “selfie”, which I didn’t know was there till I downloaded it and nearly jumped in surprise.

Gardens: places of surprise and discovery.

Dedicated to all gardeners, everywhere.

The moment Ron Coffin saw Ebor House,  he was smitten.

He hadn’t been house-hunting in Bond Head – a small historic area consisting of just a few country roads on Lake Ontario, east of Toronto.  But Ron felt mysteriously drawn to both the house and its location.

“It’s like being in another world here. You even have to go through a series of entrances to get to this home. The first entrance is a bridge that you have to go under when you leave the highway. Then there are the gates to the property. Then there are 2 entry doors before you can come into the house.”

He also hadn’t planned to buy this house.

“It was for sale for a couple of years and a friend said I should see it. I saw it and said, ‘My God!’  I fell absolutely in love with it.”

Ron didn’t know the house’s history.  He didn’t know that it had belonged to generations of an illustrious Bond Head family whose close relatives included two Lord Mayors of London, England. 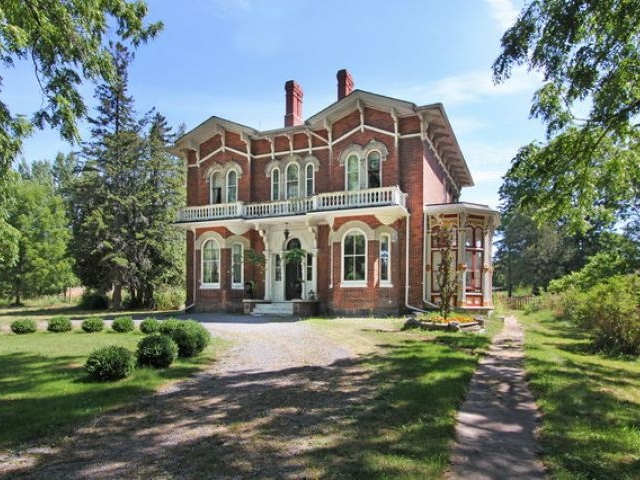 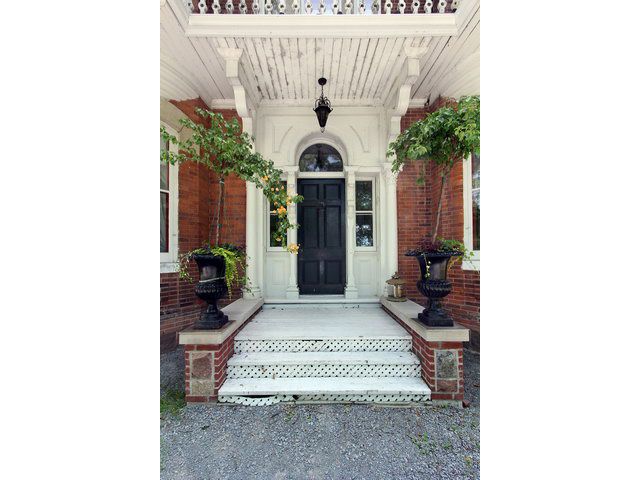 What he saw was a house badly in need of repair. Outside, four acres of weed-choked land surrounded the grand old house and barn. 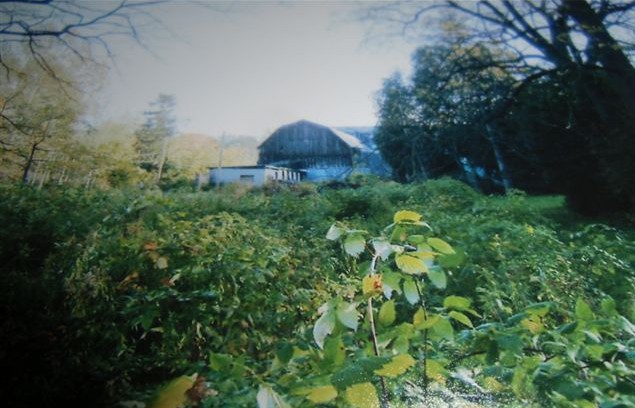 Inside, the rooms were derelict.

Cobwebs hung from the ceilings.  The rooms were crammed with old contents.

And there was that stuffy, old-house smell everywhere. 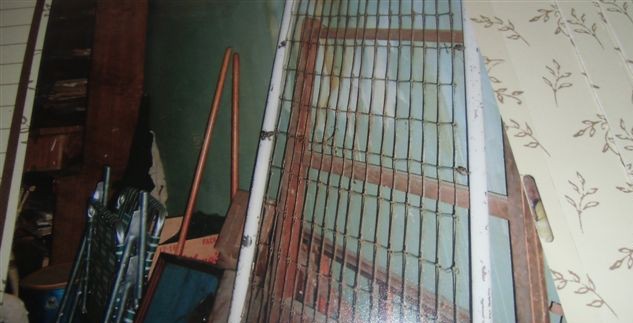 But the  house spoke to him and he answered. Ron was a man in love.

It was 8 years later when I knocked on Ron’s door.

As Ron welcomed me into his house, there were no signs that it had once been in disrepair. The place glowed from the love and attention he had lavished on its restoration.

We sat in the refurbished kitchen, sipping coffee.  I had questions and the first was the most obvious.

“What possessed you — to take on such a daunting task?” I asked.

“In life there are things you have to do,” he replied. “Some people have to climb Everest. I had to do this.” 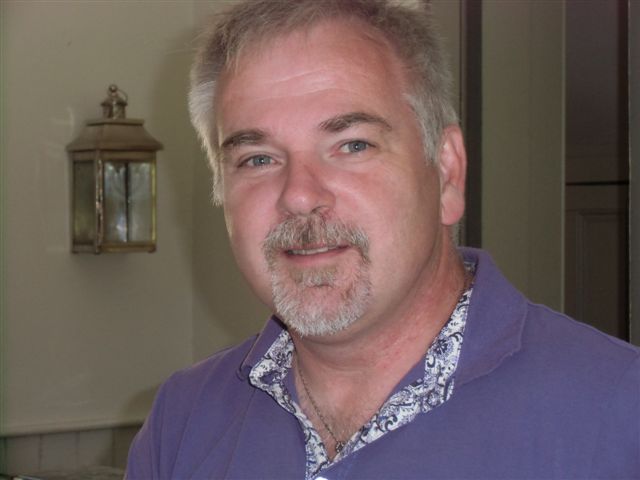 I understood, sort of.  I remembered the magnetic pull I’d felt as I sat gawking at the house and surrounding property. It had drawn me back here today.

Ron, a single parent, has four children and a dog. He ran his own business.  He also had “a huge interest in Canada’s architectural heritage and how it fits into its time”.

He hurried to begin the restoration.

“I made the common mistake of plastering the walls and painting, then realized the roof was leaking”, he said. “The house also needed all new plumbing, heating and wiring. So I had to rip out some of that work and start again.”

Luckily, the seller still had the architectural drawings from 1867,  the year Canada became a nation. (Construction on Ebor House started the following year.)  Those drawings convinced Ron that he was on the right track.

Fortunately, also, some chandeliers and furniture  – such as this Jacques & Hay sideboard on the right – were still in the house, where they’d been since 1869.  Ron bought other period furnishings – including lighting, paintings, mirrors, and other furniture — after meticulous research.

Sometimes he felt like a detective trying to solve a mystery. 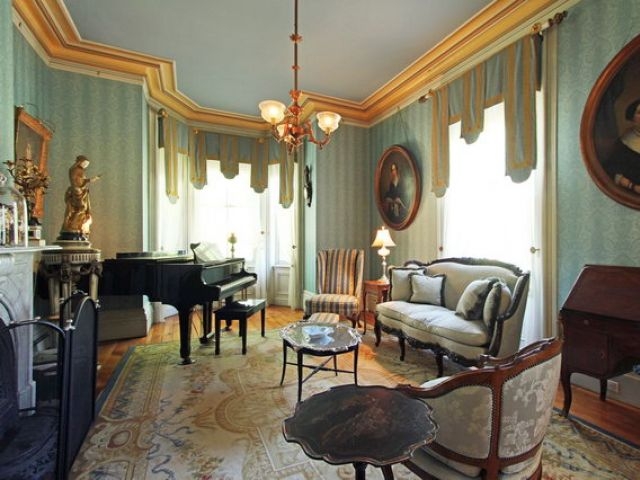 The house and grounds provided clues that helped him along the way.

The pantry doors were found in the barn. Old pennies were found under the lawn.  Ron thinks the pennies, found together,  likely fell from someone’s pocket during a picnic. 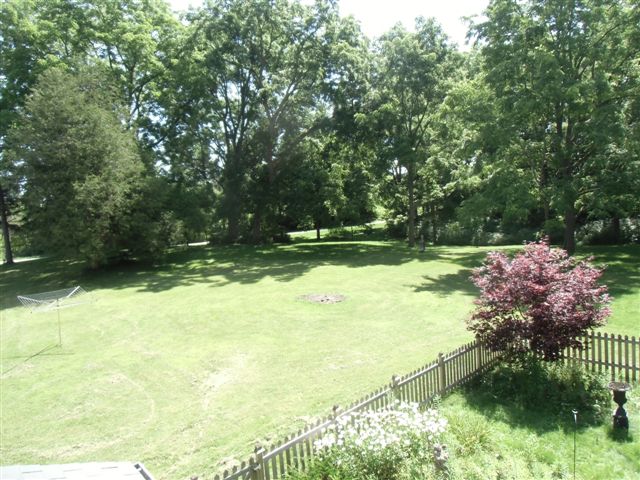 The more Ron learned, the better he understood how people lived in the late 1800’s and early 1900’s.

“One thing I learned was how the double front doors were used. On days when the family was receiving guests, they’d open the outer door, while the inside door was closed. That would signal that visitors were welcome.”

Ron also became deeply interested in the Farncombs, who built the house and lived here for more than 130 years.  He shared with me what he knew.

I should have stopped there, but I was already hooked. I needed to learn more. And that would lead me to a powerful story that was both joyful and heartbreaking.